The official lineage of The Saskatchewan Dragoons armour regiment. 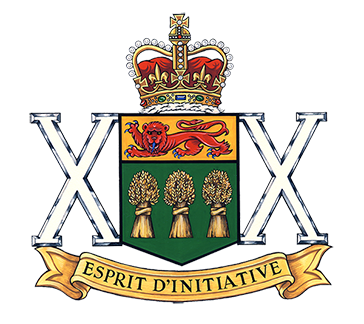 The Arms of the Province of Saskatchewan (Vert three garbs in fess Or, on a chief Or a lion passant guardant Gules) ensigned by the Royal Crown proper, supported on either side by the Roman numerals "X" Argent all above a scroll Or inscribed ESPRIT D'INITIATIVE in letters Sable. 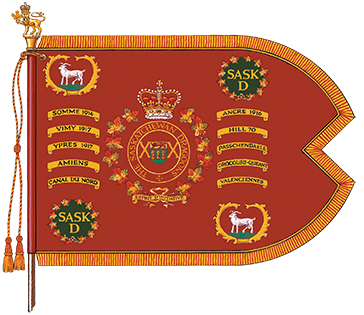 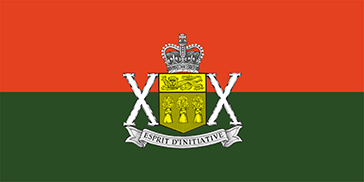 This Reserve Force regiment originated on 3 July 1905 and incorporates the following regiments.

The South Saskatchewan Regiment was disbanded for the purpose of reorganization on 1 October 1920 and reorganized the same day (GO 232/20). This change was administrative and does not affect the lineage of the regiment.

The King's Own Rifles of Canada were disbanded for the purpose amalgamation on 14 December 1936 and reorganized the next day (GO 194/36). This change was administrative and does not affect the lineage of the regiment.

The Saskatchewan Dragoons were restricted to one squadron on 1 September 1970 (CFOO 70/15).

Details of the 60th Rifles of Canada were placed on active service on 6 August 1914 for local protective duty.Footnote 15

Details of the 95th Saskatchewan Rifles were placed on active service on 6 August 1914 for local protective duty.Footnote 16

The 46th Battalion, which was authorized on 7 November 1914 as the '46th Battalion, CEF',Footnote 17 embarked for Britain on 23 October 1915.Footnote 18 On 11 August 1916 it disembarked in France,Footnote 19 where it fought with the 10th Infantry Brigade, 4th Canadian Division in France and Flanders until the end of the war.Footnote 20 The battalion was disbanded on 30 August 1920.Footnote 21

The 128th Battalion, which was authorized on 22 December 1915 as the '128th "Overseas" Battalion, CEF',Footnote 22 embarked for Britain on 15 August 1916.Footnote 23 The battalion provided reinforcements to the Canadian Corps in the field until 13 February 1917, when it was allotted to the 13th Infantry Brigade, 5th Canadian Division in England.Footnote 24 On 27 May 1917 its personnel were absorbed by the 19th Reserve Battalion, CEF'.Footnote 25 The battalion was disbanded on 30 August 1920.Footnote 26

The regiment mobilized the '1st Battalion, The King's Own Rifles of Canada, CASF' for active service on 29 January 1942.Footnote 27 The unit served in Canada in a home defence role as part of the 14th Infantry Brigade, 8th Canadian Division.Footnote 28 The battalion was disbanded on 30 March 1946.Footnote 29

GO 60/12. Actual order does not include 'Saskatchewan Rifles' in nomenclature, however, this is officially considered an administrative oversight as subsequent orders dealing with the regiment use the title.