The official lineage of The Brockville Rifles infantry regiment. 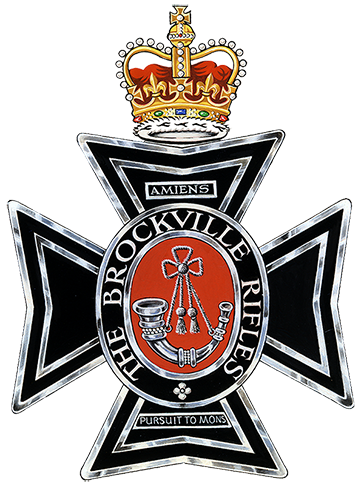 The crown represents service to the Sovereign. The Maltese cross, which is based on the insignia of the Royal Guelphic Order and the bugle are common among badges of light infantry and rifle regiments. "THE BROCKVILLE RIFLES" is the regimental title and "AMIENS" and "PURSUIT TO MONS" are regimental battle honours from the First World War.

Rifle regiments do not carry Colours. They may emblazon their battle honours on unit appointments such as cap badges.

The badge of the Stormont, Dundas and Glengarry Highlanders, with the year-dates 1944-1945, for jointly mobilizing the unit for service in Europe.

This Reserve Force regiment originated on 5 October 1866 and incorporates the following regiment and artillery battery.

Upon redesignation as The Brockville Rifles on 12 March 1920 (see above), it was organized as a two battalion regiment with the 1st Battalion (156th Battalion, CEF) on the Non Permanent Active Militia order of battle and the 2nd Battalion (no CEF designation) on the Reserve order of battle. The reserve unit was disbanded on 14 December 1936 (GO 3/37).

The Brockville Rifles were disbanded for the purpose of reorganization on 1 November 1920 and reorganized the same day (GO 253/20). This change was administrative and does not affect the lineage of the regiment.

The Brockville Rifles' date of origin is not traced to the formation date of the Volunteer Militia Company of Foot Artillery of Kingston as regimental lineage is traced from the formation of unit, not sub-unit sized organizations.

The 5th "Kingston" Field Battery, CFA was disbanded for the purpose of reorganization on 23 March 1914 and reorganized the next day (GO 60/14). This change was administrative and does not affect the lineage of the battery.

The 32nd (Kingston) Battery, CFA was disbanded for the purpose of reorganization on 15 February 1921 and reorganized the same day (GO 92/21). This change was administrative and does not affect the lineage of the battery.

The 41st "Brockville Battalion of Rifles" was called out on active service on 24 May 1870. The battalion, which served on the St. Lawrence Rivers frontier, was removed from active service on 1 June 1870.Footnote 20

The regiment mobilized the '1st Battalion, The Brockville Rifles, CASF' for active service on 18 March 1942.Footnote 31 It served in Canada in a home defence role as part of the 13th Infantry Brigade, 6th Canadian Division,Footnote 32 and in Jamaica on garrison duty from 5 August 1944 to 27 March 1946.Footnote 33 The battalion was disbanded on 30 April 1946.Footnote 34

The battery subsequently mobilized the '2nd 32nd Light Anti-Aircraft Battery, RCA, CAOF' on 1 June 1945 for active service with the Canadian Army Occupation Force in Germany.Footnote 41 The battery was disbanded on 4 April 1946.Footnote 42

GO 284/42; and Letter, Adjutant General to District Officer Commanding Military District No. 3 on 6 July 1942 (Kardex file 325.009 (D330)). The redesignation was as a result of the '3rd (Reserve) (Gananoque) Field Battery, RCA' being made dormant for the duration of the war and the continuing battery having one troop localized in Gananoque to absorb the personnel of the 3rd (Reserve) Field Battery, RCA

GO 184/40; and Document Collection 92/252, (3-0-3, Vol. 1) Battle Honours Committee, Box 45, Folder 3. The Stormont, Dundas and Glengarry Highlanders were formed as a composite unit. 'The Prince of Wales Rangers (Peterborough Regiment) (Machine Gun)' provided Headquarters Company, 'The Prince of Wales' Own Regiment (Machine Gun)' provided No. 1 Company, 'The Brockville Rifles' provided No. 2 Company and No. 3 and 4 Companies were provided by 'The Stormont, Dundas and Glengarry Highlanders'.