The Toronto Scottish Regiment (Queen Elizabeth The Queen Mother’s Own)

The official lineage of The Toronto Scottish Regiment (Queen Elizabeth The Queen Mother’s Own) infantry regiment. 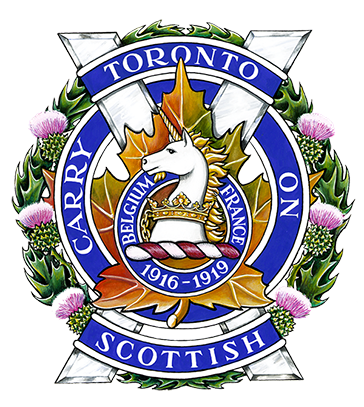 Upon a wreath of thistles proper a saltire Argent charged with an autumnal maple leaf proper both interlacing an annulus Azure edged and inscribed CARRY ON in letters Argent, the leaf charged with a like annulus inscribed BELGIUM FRANCE 1916-1919, overall on a torse Argent and Gules a unicorn's head Argent armed crined and gorged with a coronet chained Or, the upper and lower arms of the saltire set with two scrolls Azure edged and inscribed TORONTO in chief and SCOTTISH in base Argent.

The maple leaf represents service to Canada. The thistles (the national flower of Scotland) and the cross of St. Andrew (the patron saint of Scotland) are common devices among badges of highland infantry, and the overall shape of the badge is similar to The London Scottish, the regiment's first allied regiment. The unicorn is taken from the badges of the 75th "Overseas" Battalion and The Mississauga Horse in recognition of the regiment's historical connection with these units. The words "BELGIUM", "FRANCE" and the dates "1916-1919" commemorate the service of the regiment's perpetuated units during the First World War. "TORONTO SCOTTISH" is a form of the regimental title and "CARRY ON" is the motto of the regiment.

"Blue Bonnets Over the Border"

The Royal Regiment of Scotland and The London Regiment 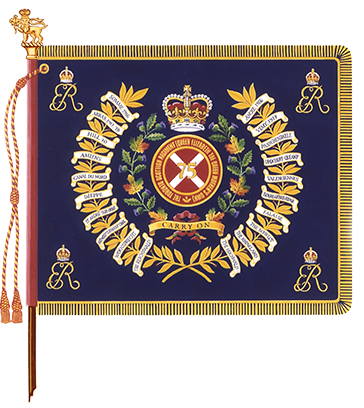 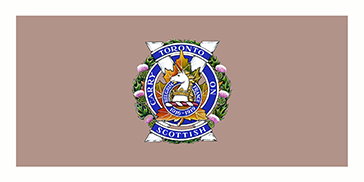 The Toronto Scottish Regiment was disbanded for the purpose of amalgamation on 14 December 1936 and reorganized the next day (GO 189/36). This change was administrative and does not affect the lineage of the regiment.

The 75th Battalion, which was authorized on 10 July 1915 as the '75th "Overseas" Battalion, CEF',Footnote 7 embarked for Great Britain on 29 March 1916.Footnote 8 It disembarked in France on 12 August 1916,Footnote 9 where it fought as part of the 11th Infantry Brigade, 4th Canadian Division in France and Flanders until the end of the war.Footnote 10 The battalion was disbanded on 15 September 1920.Footnote 11