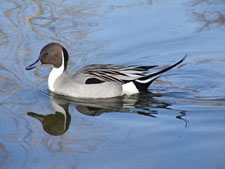 John Lusby Marsh National Wildlife Area (NWA) is located 5 kilometers (km) southwest of the Town of Amherst in Cumberland County, Nova Scotia at the head of the Bay of Fundy. The 552 hectare (ha) NWA includes the John Lusby Salt Marsh; the largest continuous section of this wetland type remaining in the Bay of Fundy ecosystem. Furthermore, the John Lusby Salt Marsh represents about 12 percent of the remaining Bay of Fundy saltmarshes. This habitat was historically important to the Canada Goose migrating north in the spring with flocks numbering up to 6000. Recently, flocks have been bypassing the John Lusby for agricultural lands to the north.

This extensive tract of salt marsh borders the Cumberland Basin with small saline ponds (with depths from 15-30 centim (cm)) interspersed throughout the marsh. In co-operation with Ducks Unlimited Canada, two brackish impoundments (20 ha with average depths of 45 cm) have been developed along the upland edge.

The NWA is also used extensively by other waterfowl, (Black Duck, Green-winged Teal, American Wigeon, Northern Pintail), during both spring and fall migration and the late summer staging periods. In summer, broods of Black Duck are common on the impoundments and salt marsh ponds. Various species of shorebirds such as Greater Yellowlegs, Lesser Yellowlegs, Short-billed Dowitcher and Willet are frequently observed here during the summer as well. A rare shorebird transient, the European Ruff, has been observed in one of the brackish impoundments.

More information on John Lusby Marsh NWA is provided in the summary table below.

NWA are protected and managed according to the Wildlife Area Regulations under the Canada Wildlife Act. The primary purpose of NWAs is the protection and conservation of wildlife and their habitat. For this purpose, and according to the legislation, Environment and Climate Change Canada can prohibit all activities in a NWA that could interfere with the conservation of wildlife. Consequently, most NWAs are not accessible to the public and all activities are prohibited. Nonetheless, Environment and Climate Change Canada has the ability to authorize some activities, whether through public notice or the issuance of permits, as long as these are consistent with the management plan goals for the NWA . For more information, consult the NWAs Management and Activities section.

Access to John Lusby Marsh NWA is not restricted and activities may be permitted in accordance with the conservation objectives of the NWA management plan. Public notices listing the authorized activities within the wildlife area are posted at access points. Waterfowl hunting is permitted on the John Lusby Salt Marsh subject to specified conditions and according to federal and provincial regulations.

More information on access and permitting for John Lusby NWA , can be obtained by contacting the Environment and Climate Change Canada regional office.

This map is for illustrative purposes only and should not be used to define legal boundaries. John Lusby Marsh NWA can also be viewed using Google Maps. Please note that the Google map is a complementary source of information and does not represent the official map or site name.