Vaseux-Bighorn National Wildlife Area is open to the public for day-use only. While most trails will be opened from June 1st, some trails and visitor facilities may remain closed until such time that they can be safely re-opened.

Remember, you are responsible for your own safety.

We hope to provide visitors with additional access to services and facilities in the near future as conditions allow, and subject to the direction from federal and provincial health authorities.

The Vaseux-Bighorn National Wildlife Area (NWA) is located in the south Okanagan-Similkameen region of British Columbia. The NWA was established in 1979 to protect habitat for species deemed to be special and important, including the charismatic California bighorn sheep, which was considered endangered at the time. The Vaseux-Bighorn NWA provides significant habitat to federally listed species at risk as well as many species of migratory birds and other wildlife. The NWA is a dynamic natural system influenced by erosion, flooding, fire, grazing, and other natural processes. The NWA is important not only as habitat for local wildlife but also is part of an important habitat corridor for migratory species. 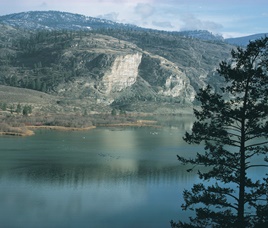 The Vaseux-Bighorn NWA officially became a federal property in 1979. The wildlife area took its name from Vaseux Lake and one of the area's most charismatic wildlife species, the California Bighorn Sheep. The Canadian Wildlife Service (CWS) manages several separate units of land which comprise the Vaseux-Bighorn NWA. The NWA is also adjacent to Vaseux Lake, a federal Migratory Bird Sanctuary (est. 1923), and other conservation land holdings protected by the province, Nature Trust of British Columbia, The Land Conservancy of British Columbia and the Nature Conservancy of Canada.

The NWA includes habitats that extend from wetlands and riparian thickets around Vaseux Lake up to arid terraces dominated by antelope bitterbrush, and finally up to rugged hillsides, dominated by exposed rock and ponderosa pine. Old ponderosa pine and Douglas-fir parklands in the area create habitat for cavity nesting birds including Lewis's and White-headed Woodpeckers. Grasslands dominated by antelope-brush, sagebrush and blue bunch wheatgrass are unique to this area and provide suitable habitat for species such as Behr's Hairstreak and several bird species including the Long-billed Curlew. Extensive wetlands surrounding the Okanagan River channel and dyke system at the north end of Vaseux Lake provide excellent migratory bird habitat.

More information is provided on Vaseux-Bighorn NWA in the summary table below.

Follow a short boardwalk through Vaseux-Bighorn NWA and you'll be rewarded with magnificient views of the beautiful landscape from the wildlife viewing tower. Don't forget your camera!

The boardwalk and an information kiosk are both accessible from a small parking lot and some public events are offered locally by the Okanagan Similkameen Conservation Alliance. 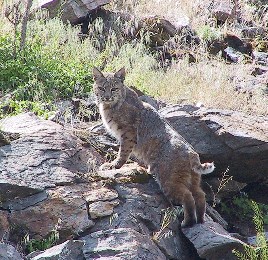 Public facilities: a small parking lot, a boardwalk, an information kiosk, and a wildlife viewing tower.

Access to the National Wildlife is from Highway 97 (five km south of Okanagan Falls and nearly 15 km north of Oliver).

More information on access and permitting for Vaseux Bighorn NWA can be obtained by contacting the Environment and Climate Change Canada regional office.

This map is for illustrative purposes only and should not be used to define legal boundaries. Vaseux-Bighorn NWA can also be viewed using Google Maps. Please note that the Google map is a complementary source of information and does not represent the official map or site name.