Polybrominated diphenyl ethers, or PBDEs, are widely used in industry due to their flame-retardant properties.Although they are useful, these substances accumulate in the environment, including the St. Lawrence River, and questions are being raised about their potential impacts.

For some thirty years, PBDEs have been added to plastics, foam padding, textiles and many other commonly used products in order to reduce their flammability. The presence of PBDEs, substances that are similar to polychlorinated biphenyls (PBCs), was detected in the environment in the United States in 1979. Several studies conducted in Europe and North America show that these products are found at all trophic levels and in the various physical and biological components of the environment. 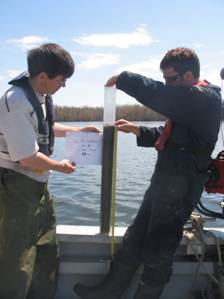 “Scientists are increasingly concerned because these emerging organic contaminants are persistent, bioaccumulable and toxic, says Environment Canada sedimentologist Magella Pelletier. “They are being found in greater abundance in the environment and their impacts are still unknown.”

Are there PBDEs in the St. Lawrence?

PBDEs are found, albeit in very small quantities, in the St. Lawrence aquatic ecosystem. The results of the research carried out by Environment Canada scientists show that the concentrations have been increasing since the mid-1980s. The concentrations in suspended particulate matter in the river near Quebec City have quintupled since 1995 and doubled in Lake Saint-Pierre sediment over the same period.

Average BDE209 concentrations in suspended particulate matter of the St. Lawrence and of a municipal effluent in 2005-2006. 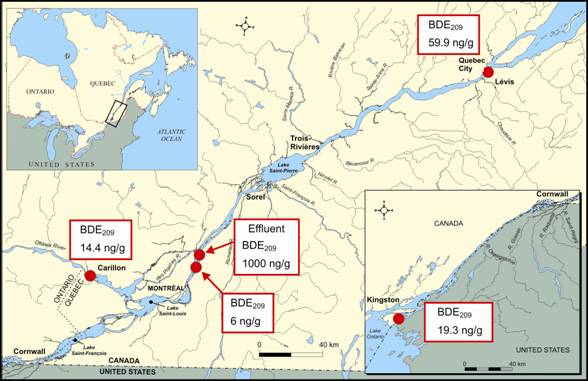 The concentrations of BDE209 in the suspended particulate matter in the river near Quebec City are three or four times higher than they are at the outflow of Lake Ontario or the mouth of the Ottawa River. Scientists thus acknowledge that Lake Ontario and the Ottawa River are not the only sources of PBDEs.Urban effluent discharges, storm sewers, tributaries and precipitation are also possible sources of the PBDEs found in the St. Lawrence. For instance, the results of Environment Canada studies show that the BDE209 concentrations rise from 6 ng/g upstream of the municipal effluent dispersion plume to 1000 ng/g in the effluent proper. 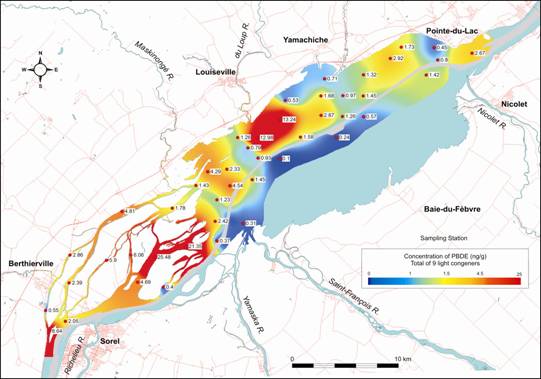 Scientists note that PBDE concentrations in Lake Saint-Pierre sediment have doubled since the early 1990s. The highest concentrations are found in the channels upstream from the lake as well as in the north, opposite Louiseville. These sectors are located in the dispersion plume of the wastewater effluent of the City of Montreal, a source of PBDE contamination.

Lake Saint-Pierre ranks second-highest among Canadian aquatic ecosystems, just after Lake Ontario, for its concentrations of light PBDEs. The City of Montreal’s urban effluent contributes in part to the light PBDE contamination of sediment in Lake Saint-Pierre. Recent scientific studies seem to show that light PBDEs are more readily bioaccumulated in the food chain and more toxic than heavier PBDEs.

What is the government doing about PBDEs?

At the present time, the Canadian Environmental Protection Act, 1999 (CEPA 1999) does not prohibit the use of PBDEs.However, the Polybrominated Diphenyl Ethers Regulations , in force since June 19, 2008, are intended to protect the Canadian environment against the risks linked to the use and release of PBDEs. The Regulations prohibit PBDE production (the tetra-, penta-, hexa-, hepta-, octa-, nona- and deca-types of BDE congeners). The use, sale, release and importation of tetra-, penta- and hexa-BDEs and mixtures, polymers and resins containing these substances are prohibited (NCCEH, 2009).

As part of the CEPA (1999) framework, the federal government evaluated the possible effects of PBDEs on human health and the environment in Canada and concluded that they are toxic substances within the meaning of the Act. In the concentrations at which they are currently found in the Canadian environment, PBDEs are not a threat to public health. However, because they bioaccumulate, they will create problems for animal species at the top of the food chain. Taking into consideration the conclusions reached in the draft of the State of the Science report on decabromodiphenyl ether (decaBDE), the government is currently revising the Risk Management Strategy for PBDEs so that it can include control measures regarding the decaBDE content in Canadian-made and imported products.