From late September through mid-October, Maine, New Hampshire, and Massachusetts were abnormally dry, with some parts of Massachusetts even reaching moderate drought status. U.S. Geological Survey data indicated that several waterways were at record or near-record low levels, with streamflows at 10% of normal or less. Water conservation alerts were issued due to low reservoirs, and crops and pastures needed to be irrigated due to dry soil conditions. Parts of the Maritimes were also dry, with most rivers and streams in New Brunswick having low water levels.

A slow-moving coastal low moved through the region beginning October 21, with a second low developing over the region on October 26. This resulted in a prolonged period of very heavy rain and strong winds in some locations. Winds gusted to 90 km/h (49 mph), with a peak of 97 km/h (60 mph) in coastal Massachusetts. Rainfall totals for the period topped 100 mm (4 in) in many areas, with highest amounts of up to 210 mm (8 in) in New Brunswick and Nova Scotia. The winds downed trees and power lines and localized flooding was reported. The rain helped ease some of the dryness in parts of the U.S. 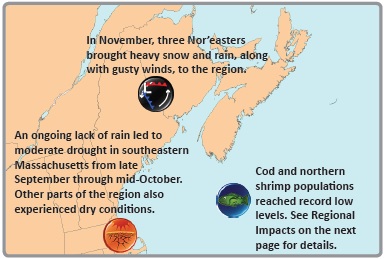 November was snowier than normal regionwide. New Brunswick climate sites had two to five times the normal snowfall, and some U.S. sites ranked this November among their top 20 snowiest.

November 30 marked the end of the 2014 hurricane season. Of the eight named storms in the Atlantic basin, six became hurricanes, with two of those becoming major hurricanes. An average hurricane season has 12 named storms, with six becoming hurricanes and three of those becoming major hurricanes. Four storms entered the Canadian Hurricane Centre response zone, which is near average. Hurricane Arthur (in July) was the only landfalling tropical system, causing the most costly power disruption in New Brunswick Power’s history. 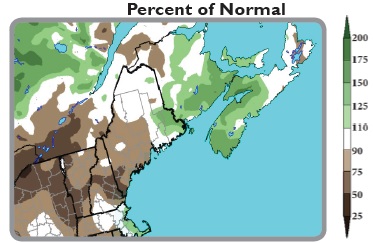 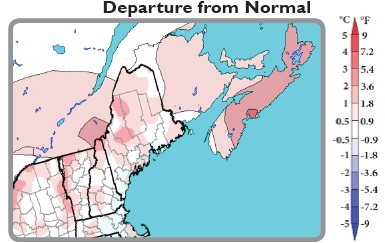 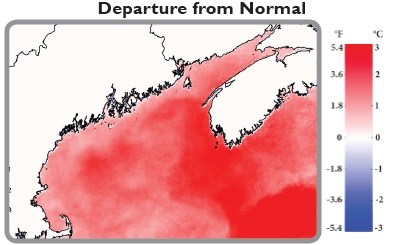 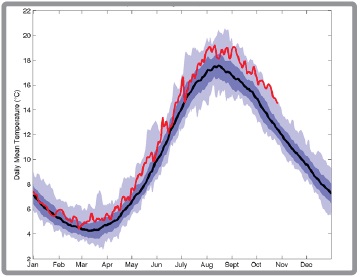 The trend towards earlier arrival of spring-like temperatures continued, with 2014 seeing one of the earliest springs in the last 30 years (figure at left). Projections indicate that over the next 75 years springlike temperatures will occur three to four weeks earlier and extend later into the fall--increasing the summer season by about two months. (Source: Northeast Fisheries Science Center)

With the current fishable stock being the smallest on record, the northern shrimp season was cancelled for a second consecutive year. The Gulf of Maine cod stock is also at record low levels. Emergency measures were implemented in early November to close more fishing grounds, limit cod catches, and ban recreational cod fishing for at least six months. The Gulf of Maine is near the southern limit for both cod and shrimp. Warmer waters have been implicated in the decline in shrimp and have likely compounded the management challenges for cod. However, lobster populations in the Bay of Fundy are booming, possibly due to warmer waters and a decrease in cod, which eat young lobster. (Sources: CBC News, November 19 and Bangor Daily News, November 6 and November 10)

The chlorophyll seasonal cycle was atypical in 2014, with the smallest spring (April) and highest summer (July) concentrations on record, followed by a late and large fall increase (figure below). Chlorophyll concentrations measure phytoplankton biomass, the microscopic plants that form the base of the marine food web. Major seasonal fluctuations can affect food availability for species whose life cycles are tuned to more normal seasonal cycles. (Source: Satellite Oceanography Data Lab at University of Maine).

Warmer temperatures and early spring snow melt have helped winter tick populations explode in New England. As a result, tick-related moose deaths have increased, and moose populations have declined. New Hampshire's moose population "has declined as much as 40% in some areas during the past three years" in part due to winter ticks. New Hampshire issued 55% fewer moose hunting permits this year, and Maine issued 25% fewer. However, New Brunswick's moose population is healthy, with the hunting season extended by two days and the quota increased. Deer ticks are also thriving in New England, bringing an increase in tick-transmitted diseases to humans. In Maine, a record number of residents were infected with anaplasmosis in 2014, and 2013 was a record year for Lyme disease. Infected ticks are also established in parts of southern New Brunswick and Nova Scotia. (Sources: National Wildlife Federation and Portland Press Herald, December 9) 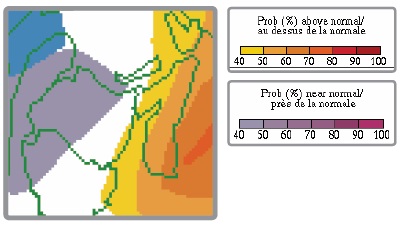 For December through February, Environment Canada is predicting an increased chance of above-normal temperatures for Nova Scotia. Warmer than normal sea surface temperatures off the Atlantic coast are expected to help maintain warm conditions on land. 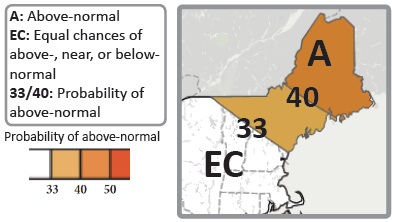 Environment Canada and NOAA's Climate Prediction Center are both predicting equal chances of above-, near-, or below-normal precipitation from December through February for most of the region. However, an increased chance of above-normal precipitation is forecast for southeastern Massachusetts based on computer models and the potential development of El Niño.

While sea surface temperatures in the equatorial Pacific Ocean became increasingly warm in November, ENSO-neutral conditions continued as of early December. A clear link between expected atmospheric conditions during El Niño and the warm waters has not been established. However, computer models continue to indicate the emergence of a weak El Niño event. The Climate Prediction Center says there is a 65% chance of El Niño during winter and lasting through spring 2015. (Sources: Climate Prediction Center El Niño forecast and El Niño blog)

Gulf of Maine Council on the Marine Environment, Climate Network

To receive this publication every quarter, sign up at http://www.gulfofmaine.org/2/climate-network-climate-outlook.