From March 25 to 26, a powerful Nor'easter affected the region. Snow totals were as high as 53 cm (21 in.), and winds gusted to 113 km/h (70 mph), with a local maximum of 172 km/h (107 mph) in Grand Étang, NS. Blizzard conditions were reported for 11 hours in Moncton, NB, with four hours of zero visibility. Coastal flooding, beach erosion, downed trees, and power outages occurred. The storm leveled the 140-year-old Church Point Lighthouse in St. Mary's Bay, NS. Also in Nova Scotia, the provincial ferry and Halifax bus services were suspended. In addition, a large section of the Trans-Canada highway between Nova Scotia and New Brunswick was closed due to whiteout conditions. 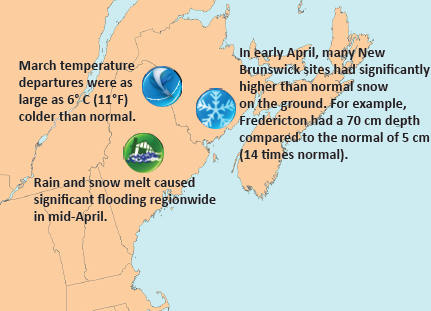 A slow-moving Nor'easter brought ice pellets, freezing rain, snow, strong winds, and whiteouts from March 30 to April 1. Sydney, NS, reported 48 hours of freezing rain. In New Brunswick and northern Nova Scotia, the storm brought down power poles and lines (spans of up to 10 poles came down in NB) and at one point 88,000 customers were affected by power outages in New Brunswick.

Rain and melting snow caused ice jams and flooding in mid-April in New Brunswick and Maine. Hundreds of homes and businesses sustained damage, and dozens of roads were closed. See Regional Impacts section for details.

At the end of April, parts of New Brunswick and Maine had an above-normal snowpack, with up to 50% above normal snow water
equivalent. Due to this, the Saint John River Watch program in New Brunswick was extended a few weeks longer than normal in May.

Severe storms on May 26 produced a weak tornado in Aroostook County, ME, and rotating clouds in New Brunswick. Pea to golf ball sized hail was reported across the region. 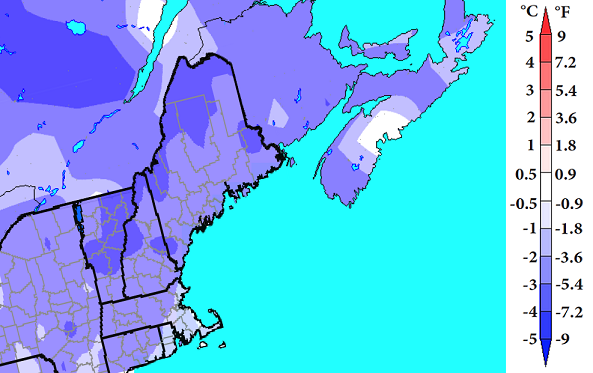 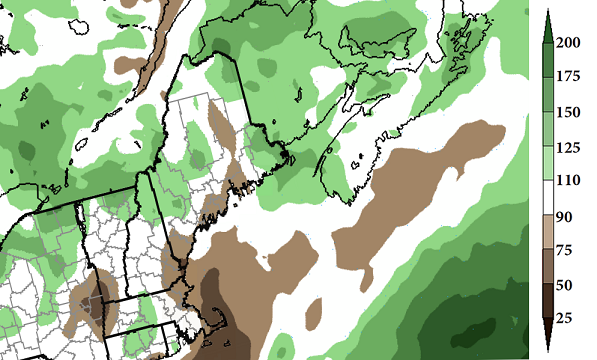 During spring, precipitation generally ranged from 90-150% of normal. However, U.S. coastal areas saw only 50-90% of normal. For March, much of the region received 90-175% of normal; however, portions of southern Nova Scotia and the U.S. coast were notably drier. In April, the Canadian provinces saw departures of 90-175% of normal, with southern New Brunswick and northern Cape Breton slightly drier. The U.S. received 50-90% of normal, except eastern Maine, which was wetter. Most of the Maritimes were quite dry in May, seeing 25-75% of normal. Northern New Brunswick, however, had up to 125% of normal. In the U.S., May precipitation ranged from 50-110% of normal in coastal areas to 90-200% inland. 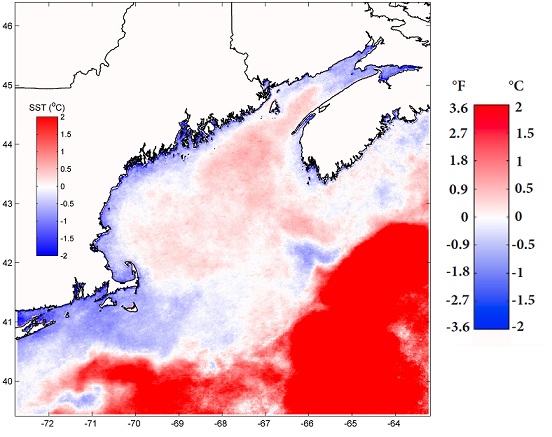 Sea surface temperature anomalies across the region varied. Deeper areas such as the Wilkinson and Jordan Basins, deeper parts of the Bay of Fundy, and especially the Gulf Stream offshore continued to experience warm anomalies. Departures in these areas ranged from +0.5°C (+0.9°F) to greater than +1.5°C (+2.7°F). Although weaker, these warm anomalies have persisted all winter and since 2013. However, shallow coastal regions experienced cold anomalies, with departures from -0.5°C (-0.9°F) to -1°C (-1.8°F). Northeastern portions of the Scotian Shelf were also slightly below average.

The harsh winter took a toll on area golf courses. The already short golf season started late, meaning thousands of dollars in lost income. In addition, multiple freezes and thaws led to ice damage on greens and costly repairs. Maine State Golf Association's opening tournament at Biddeford-Saco Country Club in mid-April was canceled, making it the first time the tournament could not be played at the site. 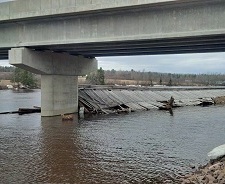 The 87-year-old Cherryvale Bridge was washed away by flood waters in mid-April. Credit: New Brunswick Department of Transportation and Infrastructure

Rain, warm temperatures, and quick melting of a larger-than-normal snowpack caused flooding in mid-April in the Maritimes and Maine. Preliminary data indicated that several rivers had record or near-record crests. The flooding caused significant damage to roads, bridges, and other infrastructure. In Maine, a five-mile long ice jam flooded the only road to Allagash and St. Francis, stranding residents. In Cape Breton, NS, a mudslide reduced travel on the Cabot Trail. In New Brunswick, about 70% of the village of Sussex Corner was under water and the Cherryvale covered bridge, which had been in place for 87 years, was swept downstream. Flood damage in New Brunswick was estimated to exceed $14 million (Canadian dollars). The provincial government approved a Disaster Financial Assistance program that will help pay for "uninsurable damages and losses that threaten health and safety."

While recent sea surface temperatures have been cooler, 2013 temperatures were the second warmest since 1982. In fact, from 2004 to 2013, temperatures in the Gulf of Maine increased faster than 99.9% of the global ocean. The ecosystem responded to these unusual conditions in unexpected ways. The spring 2013 phytoplankton bloom was among the smallest in the satellite record (since 1998), and this may have impacted the zooplankton community. The phytoplankton community recovered and was back to historical conditions in the fall. One of the notable trends in the oceanographic conditions in the Gulf of Maine is a later appearance of fall-like temperatures.

In March, maple season was weeks behind schedule. Cold temperatures prevented sap from running to taps, while deep snow made some taps inaccessible. Growers were also behind. In mid-May, blueberry producers in the Maritimes reported low winter injury, but fruit buds were 5 to 7 days behind average. Potatoes, corn, and apples were also reported to be behind schedule. Conditions improved in late May, and farmers were optimistic for a productive season. 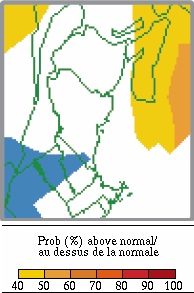 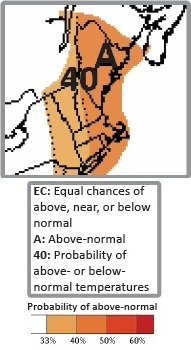 Environment Canada and NOAA's Climate Prediction Center are both predicting equal chances of above-, near-, or below-normal precipitation for June-August.

While El Niño Southern Oscillation conditions remain neutral, sea surface temperatures in the equatorial Pacific Ocean were above-average. In early June, NOAA indicated chances for El Niño development were 70% during summer and 80% during fall and winter.

In mid-May, the Woods Hole Oceanographic Institution in Massachusetts predicted a moderate harmful algal bloom called red tide for the Gulf of Maine during 2014. Red tide can adversely affect the health of humans and marine ecosystems as well as local and regional economies. By early June, high levels of the red tide toxin were detected in the western Gulf, leading Maine, Massachusetts, and New Hampshire to close several shellfish beds.

Gulf of Maine Council on the Marine Environment, Climate
Network

This is a new publication designed to help others understand climate trends and their impacts. We welcome your feedback.