There has been only one vessel named HMCS Matane in the Royal Canadian Navy. 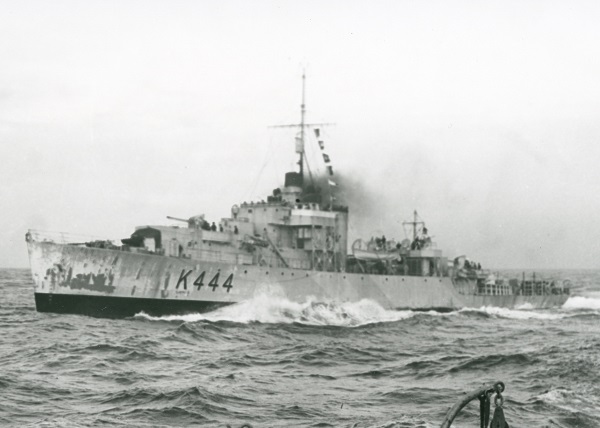 In April 1944, she joined Escort Group 9 in Londonderry, Northern Ireland, as Senior Officer’s ship, thereafter serving mainly on escort and patrol duty in United Kingdom waters. Postwar reassessment of U-boat kills credits HMCS Matane with a share in the sinking of German submarine U-163 in the Bay of Biscay on 13 March 1943, and of U-311 in the North Atlantic on 22 April 1944. She was also present on D-Day. On 20 July, she was badly damaged by a German glider bomb off Brest and towed to Plymouth, England, by HMCS Meon.

After eight and one half months’ repairs at Dunstaffnage, Scotland, HMCS Matane worked-up up at Tobermory, Scotland and on 13 May 1945 sailed from Greenock, Scotland, to escort convoy JW.67 to North Russia. She was detached on 16 May, however, to help escort fourteen surrendered U-boats from Trondheim, Norway to Loch Eriboll, Scotland. After one round trip to Gibraltar as convoy escort, she left Londonderry in June for Esquimalt, British Columbia, via Halifax. She arrived at Esquimalt in July, and on 11 February 1946 was paid off into reserve. In 1947 she was sold, and her hull sunk the following year as part of a breakwater at Oyster Bay, British Columbia.