Rationale for the revision:

This quarterly financial report has been prepared as required by section 65.1 of the Financial Administration Act and in the form and manner prescribed by the Treasury Board. This report should be read in conjunction with the 2018-19 Main Estimates. This quarterly report has not been subject to an external audit or review.

Polar Knowledge Canada (POLAR) was created pursuant to the Canadian High Arctic Research Station Act and came into force on June 1, 2015. POLAR’s mandate is to advance knowledge of the Canadian Arctic to improve economic opportunities, environmental stewardship and the quality of life of its residents and all other Canadians; promote the development and dissemination of knowledge of the other circumpolar regions, including the Antarctic; strengthen Canada’s leadership on Arctic issues, and establish a hub for scientific research in the Canadian Arctic.

Further information on the mandate, roles, responsibilities and programs of POLAR can be found by accessing the 2018-19 Main Estimates.

This quarterly report has been prepared using an expenditure basis of accounting. The accompanying Statement of Authorities includes POLAR's spending authorities granted by Parliament and those used by POLAR, consistent with the Main Estimates for the 2018-19 fiscal year. This quarterly report has been prepared using a special purpose financial reporting framework designed to meet financial information needs with respect to the use of spending authorities.

POLAR uses the full accrual method of accounting to prepare and present its annual departmental financial statements that are part of the departmental results reporting process. However, the spending authorities voted by Parliament remain on an expenditure basis.

For the period ending June 30, 2018, POLAR had total annual authorities of $29.1 million. Presented in Graph 1 below are the budgetary authorities and expenditures for the first quarter of 2018-19 and 2017-18. For more details, refer to the Statement of Authorities. 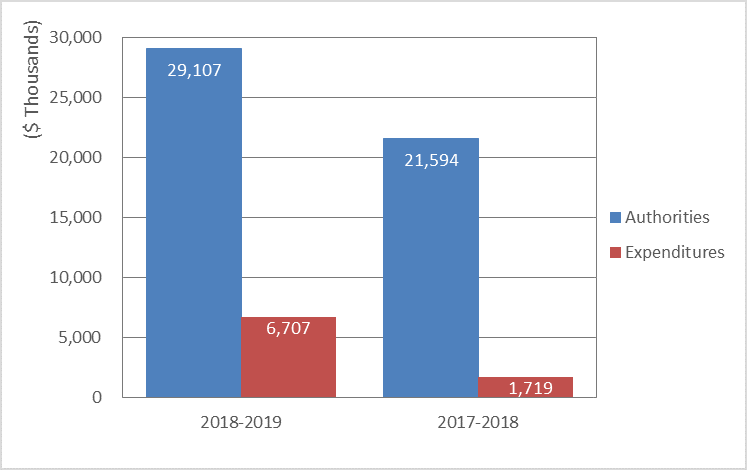 POLAR incurred a total of $6.7 million in expenditures in the first quarter, representing approximately 23% of the total available annual authorities. The expenses were allocated mostly to transfer payments and personnel, for amounts of $4.5 million and $1.9 million respectively, accounting for 66% and 28% of the total. The remaining 6% primarily consists of expenses for transportation and communications, professional and special services and rentals. Refer to the Departmental Budgetary Expenditures by Standard Object for more details.

As of June 30, 2018, the total budgetary authorities available for use for the year increased from $21.6 million in 2017-18 to $29.1 million in 2018-19. The increase is mainly due to additional funds approved in the original Treasury Board submission for the equipment and on-going operations of the Canadian High Arctic Research Station in Cambridge Bay and the reprofiling from 2017-18 to 2018-19 of $0.4 million to fulfill committed transfer payment agreements.

As a new agency, there are a number of risks outside of POLAR’s control that can potentially impact the achievement of planned results. Efforts are underway to try to mitigate these risks through sustained engagement, capacity building, funding programs, partnership development and staffing processes.

Community buy-in is one possible risk given the upcoming official opening of the CHARS campus in Cambridge Bay, which serves as the headquarters of POLAR. The internal conditions influencing this risk include the ongoing staffing process and relocation of employees to Nunavut, the recently launched Grants and Contributions competitive funding process and ongoing community engagement. Stakeholder expectations regarding the benefits derived from the CHARS campus are extremely high in terms of employment opportunities for local people, economic development in Nunavut, and support for local businesses and organizations. POLAR is seeking to mitigate this risk through outreach and engagement, hiring of local people, and support for education programs and science camps in Cambridge Bay. There are also expectations by other jurisdictions in Canada’s North regarding the ability of POLAR’s programs to have an impact in other areas of Canada (specifically Yukon, the Northwest Territories, Nunavik and Nunatsiavut) as well as the trickledown effect from having the CHARS campus as a “hub” for national and international science activities.

Inability to deliver on objectives of the pan-northern S&T Program is a specific risk for POLAR as a science-based agency. The scope of the S&T program is very broad and has increased expectations by partner organizations for POLAR to be fulfilling a world-class science function as well as a coordination role in Canada on Arctic and Antarctic science. The breadth and complexity of this work will make delivery a challenge with current resource levels. To mitigate this risk, POLAR is developing partnerships to help address gaps in capacity and science expertise. Partnership efforts include multiple stakeholders, such as federal government departments/agencies, northern organizations, territorial governments, academia, Indigenous organizations and international players.

Recruitment and retention of highly-qualified staff will be an ongoing risk for POLAR. Many factors, including the interest, availability and preparedness of Inuit for positions within POLAR, will have implications for POLAR’s obligations under the Nunavut Agreement to work towards 85% representation of Inuit across job groups and levels. Although POLAR will continue to give preference to job applicants who self-identify as Inuit under the Nunavut Agreement, increasing Inuit representation will be especially challenging given that there are science-specific classifications and post-graduate (M.Sc., Ph.D.) education requirements for many positions related to the S&T program. This risk is compounded by the fact that the CHARS campus is in a small Northern community with a limited local labour pool for science-focused positions. As a result, POLAR will continue to support Pilimmaksaivik in the development and implementation of a whole-of-government (WoG) approach to Inuit employment and training, and develop and implement a POLAR-specific Inuit Employment and Pre-employment Training Plan that supplements and leverages WoG initiatives. This includes continuing efforts to support long-term capacity building among youth in Nunavut, including through funding science camps and workshops.

Addressing the risks highlighted is important to the agency as successful mitigation will ultimately allow POLAR to implement its mandate and meet stakeholder expectations. The upcoming opening of the CHARS campus will be a key transition period for the organization and for the Cambridge Bay community. In addition, the potential positive impact of the science and knowledge generated by the S&T program will help Canadians better understand fundamental changes occurring in the Northern environment. Employment and training opportunities offered by POLAR in Cambridge Bay should also contribute positively to the economic development of the region.

Although the timing of the official opening has not been confirmed, the construction of the CHARS campus is nearing completion. Relocation of employees to Cambridge Bay has been on-going since August 2017 and will continue as new positions are staffed.

As of this fiscal year and under the new Treasury Board Secretariat Policy on Results, departments will be implementing the new Departmental Results Framework. This framework consists of departmental core responsibilities and their related programs.

There has been no other significant changes to the programs or structure of POLAR since its establishment on June 1, 2015.

(in thousands of dollars)

(in thousands of dollars)