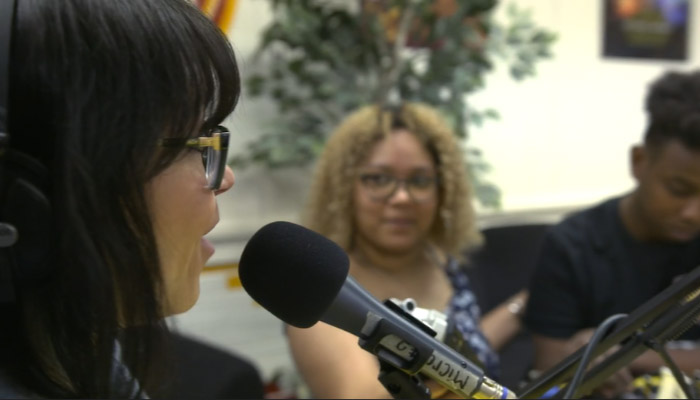 Radio informs. It reflects local views and needs. It serves as a venue for expression and it tells the local stories. Radio gives young people the chance to take part in and learn about their community.

The camera pans the Edmonton skyline. A man with a toque drives a Radio Cité car across the bridge and into a parking garage, as the radio plays.

FEMALE RADIO HOST (voiceover): What better way to wake up in the morning while staying informed and listening to the best music in town!

DAVID REDMOND (voiceover): Bonjour Edmonton! Welcome to 97.9 Radio Cité David Redmond with you to accompany you in your daily routine...

A man in atoque enters Radio Cité studio and checks all the equipment.

MAN WITH TOQUE: What is Radio Cité? Radio Cité is an opportunity to stay on top of everything that is happening in the Francophone community here in Edmonton.

Throughout the six following interviews, the camera pans to multiple scenes of on-air and off-air activity around the station.

CAROLE SAINT-CYR, Director General, Radio Cité 97.9: It's a French-speaking community radio station. That means a radio station that serves the community. It is a way of getting people to come and tell their stories, whether they are of African, European, Acadian, Quebec or Franco-Albertan origin. So it is about breaking down all these walls to truly build a single Francophone community with all its French accents.

MAN WITH SHAVED HEAD: We broadcast French-language music, but not just that. It's also radio that reflects the diversity we have here in Alberta and more specifically in the Alberta Francophone community with music from Africa, Europe, and Asia... In short, it's a blend of all of these things that makes this station a unique radio station.

JEAN PHILIPPE PERETTI, Programming Committee, Radio Cité 97.9: Community radio is the perfect medium for people in the community to come and participate, prepare programs on a voluntary basis, and I think it can have a ripple effect, and it can also maintain and increase Francophone pride.

Camera pans the outside of Radio Cité's building.

MAN WITH TOQUE: The support we received from Western Economic Diversification Canada was invaluable. Its support was very important to us. It allowed us to be on the air, to broadcast our programs, but also to be close to the community.

CAROLE SAINT-CYR:  However, I was told that this was the first time Western Economic Diversification Canada had supported radio. Radio Cité is almost like a school for the younger ones, to understand what it is like to communicate in French, but it is also about creating jobs. It gives a gateway to more young people or people who want to pursue a career in communications, and right now we are in schools as well. We are going to meet with the young people, we are giving courses to try to get them interested in communications in French, which they are not yet aware of...

MAN WITH TOQUE: What I see for the future of Radio Cité is a future that is limitless. It is a future that is so bright and full of opportunities, because the Francophone community here in Alberta and Edmonton continues to grow year after year, and that is wonderful, but it also means that we, as a radio - Radio Cité - cannot stick to current standards. You always have to want to make even more progress. In this way, we will be able to offer quality content, and above all, above all, reflect the image of the Francophone community.

The Canada wordmark appears on screen.

Impact: Edmonton's official language minority community has a radio station to reinforce its sense of community.