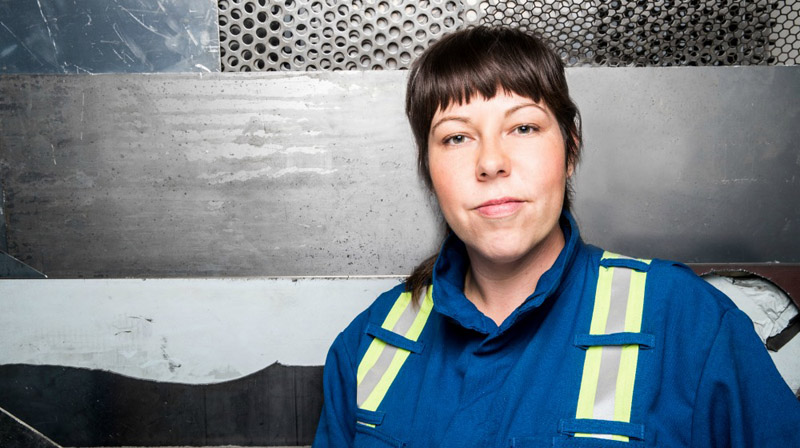 The pursuit of inclusive participation in the economy requires a change in perspectives and a change in traditional ways of thinking. This belief prompted a small group of women to set up Women Building Futures (WBF) in 1998.

WBF's goal is to prepare women for careers in industries in which, historically, they have been under-represented. Through skilled trades training and mentorship, WBF works with industry to create programs and career opportunities to help women achieve financial security that can transform their futures.

WD has been a proud supporter of WBF since 2005. During that time, WD has funded 6 projects for a total investment of approximately $5.5 million. WD funding has helped WBF:

With support from WD and others, WBF gives women a new path to economic freedom. But taking that path requires courage, determination, hard work and a leap of faith.

That means going for your goal even in the face of fear. Take, for example, Cora-Lee. She's the voice behind WBF's award-winning "You Got This" marketing campaign, which encourages women to consider a career in the trades. Cora-Lee says becoming a pipefitter is a major source of pride because it means she didn't back down from challenges. Her red seal ticket gave Cora-Lee independence, a sense of self-worth, and the ability to create a bright future for herself and her 2 daughters.

That sense of accomplishment can be heard in many WBF stories. Helena is proud to be called tough and courageous when she tells people she is a professional Class 1 truck driver.

Karlayne, a second-year apprentice millwright,can't wait to see an eager apprentice look up to her one day.

Kristen, a graduate of WBF's Journeywoman Start Class, is now a first-year electrician. She loves building things and working with her hands.

These stories are a small sample from the thousands of women who have participated in WBF programs. Their stories are part of why WD is so proud to work with WBF in our mutual goal of inclusive participation in Western Canada's economy. WBF continues to place women in the workforce at a rate of 90%. That suggests WBF hit the nail on the head when it set out to empower women to build their futures through careers in the trades. The rest, as they say, is "herstory".

Impact: Alberta women are given the training they need to enter careers where women have been historically under-represented.