Foreign Interference and You

What is Foreign Interference?

Foreign interference is deliberate and covert activity undertaken by a foreign state to advance its interests, often to the detriment of Canada’s. The CSIS Act describes Foreign-Influenced Activities, which is another term for Foreign Interference, as “activities within or relating to Canada that are detrimental to the interests of Canada and are clandestine or deceptive or involve a threat to any person”. 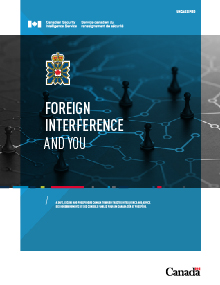 Foreign interference is distinct from normal diplomatic conduct or acceptable foreign state lobbying; it is purposely covert, malign, and deceptive. States cross a line anytime they go beyond diplomacy to conduct activities that attempt to threaten our citizens, residents and institutions, or to compromise our way of life, undermine our democratic processes, or damage our economic prosperity.

Foreign governments engage in foreign interference activities in Canada and target Canadians to advance their interests, sometimes at our expense, in an effort to achieve geopolitical, economic, military and strategic advantage. They seek to sow discord, disrupt our economy, bias policy development and decision-making, and to influence public opinion. In many cases, clandestine influence operations are meant to support foreign political agendas or to deceptively influence the targeted country’s policies, officials, research institutions or democratic processes.

Foreign interference is a complex national security threat. It poses a significant threat to the integrity of our political systems, democratic processes, social cohesion, academic freedom, economic prosperity and challenges Canadians’ rights and freedoms. In short, and as described by the National Security and Intelligence Committee of Parliamentarians, foreign interference threatens the fundamental values of our country and our national security.

CSIS has observed and investigated multiple instances of foreign states targeting Canada and Canadian interests through the use of human intelligence operations, state-sponsored or foreign influenced media, and sophisticated cyber techniques. Traditional interference through human intelligence operations remains the greatest danger, but interference through hostile cyber activity is a growing concern.

As an advanced economy and an open and free democracy, Canada has long been targeted by hostile states seeking to acquire information, intelligence and influence to advance their own interests. These activities pose strategic, long-term threats to Canada’s interests, jeopardize our future prosperity, and have a corrosive effect on our democratic processes and institutions.

The Committee believes that these states target Canada for a variety of reasons, but all seek to exploit the openness of our society and penetrate our fundamental institutions to meet their objectives. They target ethnocultural communities, seek to corrupt the political process, manipulate the media, and attempt to curate debate on postsecondary campuses. Each of these activities poses a significant risk to the rights and freedoms of Canadians and to the country’s sovereignty: they are a clear threat to the security of Canada.

Who and What is Targeted?

On university campuses, foreign states may seek to exert undue influence, covertly and through proxies, by harassing dissidents and suppressing academic freedoms and free speech that are not aligned with their political interests. Similarly, these actors may attempt to influence public opinion and debate in Canada through interference in our press or online media.

Elected and public officials across all levels of government, representing all political parties, are targeted: Members of Parliament, members of provincial legislatures, municipal officials and representatives of Indigenous governments. Public servants, Ministerial and political staff, and others with input into or influence over the public policy decision-making process are also attractive targets.

Hostile foreign actors also target the fabric of Canada’s multicultural society, seeking to influence Canadian communities, including through threats, manipulation and coercion. Some of these communities are vulnerable targets of foreign interference from states seeking to exploit them in various ways to advance the foreign state’s interests, sometimes to the detriment of Canadian values and freedoms.

Foreign Interference in Academia and Research

Foreign actors may seek to interfere in academia through a range of actions, such as:

In trying to influence public debate at academic institutions, foreign states may sponsor specific events to shape discussion rather than engage in free debate and dialogue. They may also directly or indirectly attempt to disrupt public events or other on-campus activities they perceive as challenging their political positions and spread disinformation, undermining confidence in academic discourse and expertise.

A growing number of states have built and deployed programs dedicated to undertaking online influence as part of their daily business. Adversaries use online influence campaigns to attempt to change civil discourse, policymakers’ choices, government relationships, and the reputation of politicians and countries both nationally and globally. They try to delegitimize the concept of democracy and other values such as human rights and liberty, which may run contrary to their own ideological views. They also try to exacerbate existing friction in democratic societies around various divisive social, political, and economic issues. While online foreign influence activities tend to increase around elections, these ongoing campaigns have broadened in scope since 2018, expanding to react and adapt to current events, shifting their content strategies around trending news stories and popular political issues (Source: 2020 National Cyber Threat Assessment, Canadian Centre for Cyber Security).

What Can You Do?