The Administrative Tribunals Support Service of Canada (ATSSC) is pleased to present to Parliament its annual report on the administration of the Access to Information Act (the Act) for fiscal year April 1, 2018 to March 31, 2019.

Section 72 of the Act requires the head of every federal government institution to prepare and table an annual report to Parliament on the administration of the Act during the fiscal year. This report provides an overview of the activities of the ATSSC in implementing the Act.

The Act is intended to complement and not replace existing procedures for access to records and is not intended to limit in any way access to the information that is normally available to the public.

The ATSSC is fully committed to both the spirit and the intent of the Act to foster a culture of openness and transparency within the organization.

The Access to Information and Privacy (ATIP) Office is responsible for administering the Access to Information Act (the Act) on behalf of the ATSSC. Its mandate is to ensure compliance with the legislation, regulations and government policy and to create organizational standards and directives relating to the Act. Responsibility for the powers, duties and functions for the administration of the Act has been formally established and is outlined in the Delegation Order signed by the Chief Administrator. The Director, Planning and Communications and the ATIP Manager have been delegated authorities as described in the Delegation Order included in Appendix A.

In addition to the formal requests, the ATSSC received 31 consultations from other federal institutions and other organizations as well as 13 informal requests. A copy of the Statistical Report is included in Appendix B.

In the last three reporting periods, the statistics indicate increases of 150% for formal requests and 15% for consultation requests received. The ATSSC also noted a 24% decrease for informal requests.

The overall volume of requests has increased by 44% from 62 requests in 2016-17 to 89 requests in this reporting period. 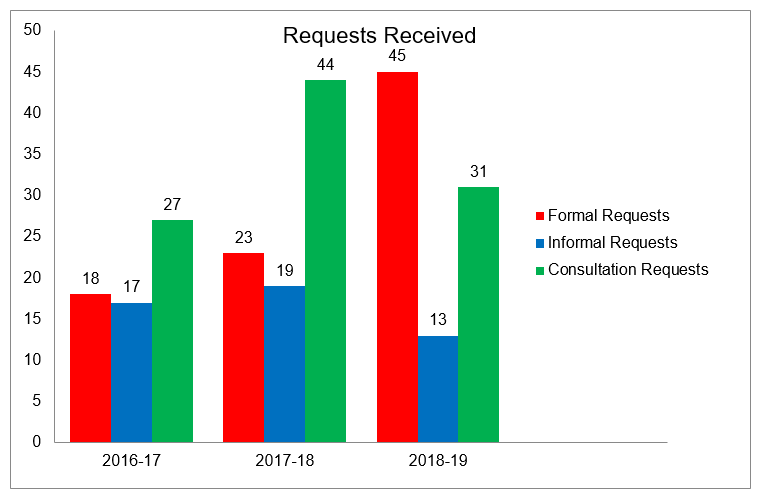 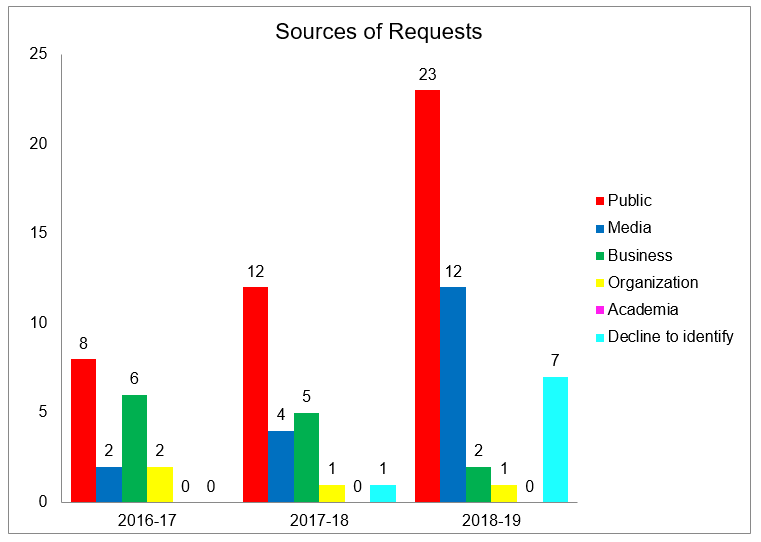 During this reporting period, the ATSSC completed 44 requests under the Act, five of which resulted in a full release. The information sought was released in part in 13 cases and withheld entirely in four cases. No records existed in 14 cases. The remaining eight requests were transferred (two) and abandoned (six).

Statistics relating to the application of three new exemptions added to the Access to Information Act follow:

In accordance with section 20 of the Service Fees Act, the ATSSC must report annually to Parliament on the fees collected by the institution. The Access to Information Act and Regulations set out the fees which may be collected for the purposes of processing requests.

As per the Interim Directive on the Administration of the Access to Information Act, issued on May 5, 2016, the ATSSC waives all fees prescribed by the Act and Regulations, other than the $5 application fee in paragraph 7(1)(a) of the Regulations. No requests necessitated a fee waiver during this reporting period.

During the reporting period, of the 45 requests received, the ATSSC collected the $5 application fee in 13 cases. This represents a total revenue of $65. Additionally, application fees were waived for 32 requests. The total operating cost for the ATSSC’s ATIP Office during this fiscal year was $141,916.

To increase the knowledge and understanding of the Act across the ATSSC, training and awareness sessions were delivered by the ATIP Office. These sessions provided general information on the purpose and provisions of the Act, as well as the roles and responsibilities of employees and the ATIP Office.

During the reporting period, the ATIP Office delivered one awareness session and one open-house event to ATSSC employees. Approximately 50 individuals participated in these information activities which represents approximately ten percent of ATSSC employees.

The ATSSC is guided by the Treasury Board of Canada Secretariat (TBS) suite of access to information policy and guidance instruments. During this reporting period, the ATSSC did not implement any new or revised institution-specific policies, guidelines or procedures.

This reporting period, no complaints were filed with the Office of the Information Commissioner of Canada (OIC) against the ATSSC regarding the processing of access to information requests.

The OIC completed its investigation into one existing complaint against the ATSSC. In this case, the complainant alleged that the ATSSC failed to provide all responsive records. The OIC’s finding concluded that the complaint was well-founded. At the end of the fiscal year, three complaints were ongoing.

The monitoring of access to information requests was conducted through the case management system containing all relevant and necessary information to ensure compliance with the legislated requirements and reporting obligations. The system was updated as new requests were received or the status of a file was changed. Weekly meetings between the ATIP Manager and the ATIP analyst as well as meetings between the ATIP Manager and the Director, Planning and Communications to discuss workload and priorities also assisted the ATSSC in meeting its statutory obligations.

The Chief Administrator, pursuant to section 73 of the Access to Information Act, hereby designates the persons holding the positions set out in the schedule hereto, or the person occupying the position on an acting basis, to exercise the powers, duties and functions of the Chief Admministrator as the head of the Administrative Trubunal Support Services of Canada, under the provisions of the Act and related regulations as specified in the schedule opposit each position.

Note:All requests previously recorded as “treated informally” will now be accounted for in this section on.

3.1  Reasons for extensions and disposition of requests

5.1  Consultations received from other Government of Canada institutions and organizations

5.2 Recommendations and completion time for consultations received from other Government of Canada institutions

5.3 Recommendations and completion time for consultations received from other organizations