This quarterly financial report has been prepared as required by section 65.1 of the Financial Administration Act and in the form and manner prescribed by the Treasury Board. This report should be read in conjunction with the 2017-18 Main Estimates and Supplementary Estimates (A & B). This quarterly report has not been subject to an external audit or review. 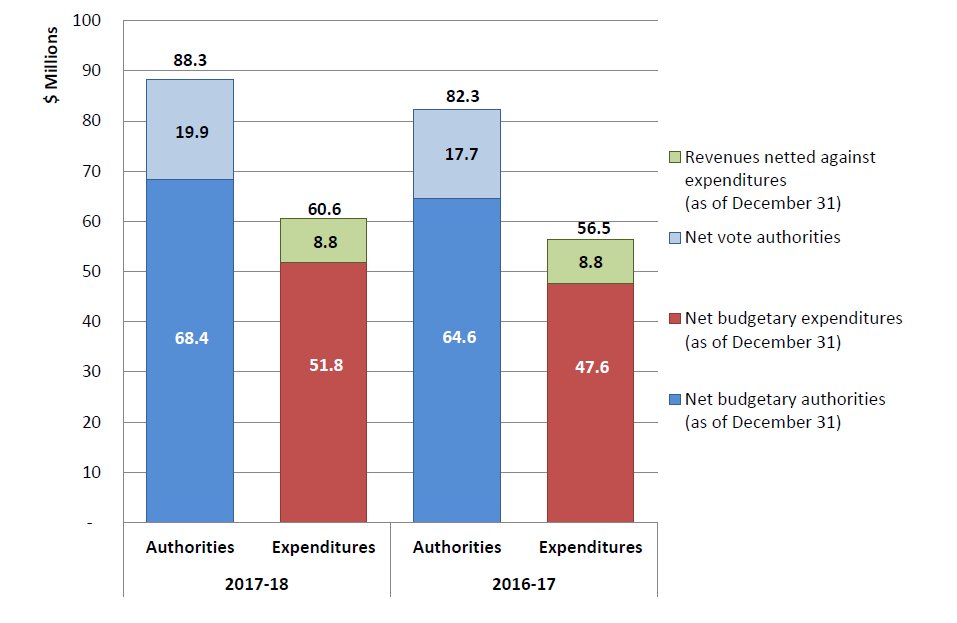 The ATSSC expended $60.6 million (69% of total authorities) in the first three quarters of 2017-18. Of this total, $8.8 million was offset by revenues for a total of $51.8 million in net budgetary expenditures. The majority of expenditures relate to personnel, which totaled $51.1 million (84% of gross expenditures). The remaining 16% primarily comprises professional and special services (mainly informatics services, translation costs and consulting services) and transportation and communications (mainly travel costs).

Third quarter gross budgetary expenditures increased from $19.9 million in 2016-17 to $21.8 million in 2017-18 mainly due to an increase of $1.6 million in personnel due to retroactive payments resulting from the signing of collective agreements and staffing increases.

The ATSSC has identified two key risks and responses for 2017-18.

There is a risk to the ATSSC’s ability to provide the additional services needed as a result of unexpected caseload surges and/or workload increases. Emerging trends, priorities, needs and legislative changes are being monitored to ensure adequate resources. In addition the ATSSC is building into the budget planning and allocation processes the flexibility to re-allocate resources if and when required.

There is also a risk that the ATSSC may not be able to maintain an appropriate delivery capacity to meet the mandates and the evolving needs and priorities of the tribunals it serves. The ATSSC has begun the process of analyzing its workforce to inform different strategies relating to talent management, retention and recruitment and ensure adequate succession planning. As well as enhance organizational capacity by developing and implementing a Human Resources corporate planning and reporting function.

There has been no significant change to the programs or structure since the ATSSC was established on November 1, 2014.