This quarterly financial report has been prepared as required by section 65.1 of the Financial Administration Act and in the form and manner prescribed by the Treasury Board. This report should be read in conjunction with the 2016-17 Main Estimates and Supplementary Estimates (A). This quarterly report has not been subject to an external audit or review.

These services include the specialized services required by each tribunal (e.g. registry, research and analysis, legal and other mandate or case activities specific to each tribunal), as well as internal services (e.g., human resources, financial services, information management and technology, accommodations, security and communications).

Further information on the mandate, roles, responsibilities and programs of the ATSSC can be found by accessing 2016-17 Main Estimates.

This quarterly report has been prepared using an expenditure basis of accounting. The accompanying Statement of Authorities includes the ATSSC's spending authorities granted by Parliament and those used by the ATSSC, consistent with the Main Estimates and the Supplementary Estimates (A) for the 2016-17 fiscal year. This quarterly report has been prepared using a special purpose financial reporting framework designed to meet financial information needs with respect to the use of spending authorities.

The ATSSC uses the full accrual method of accounting to prepare and present its annual departmental financial statements that are part of the departmental performance reporting process. However, the spending authorities voted by Parliament remain on an expenditure basis. 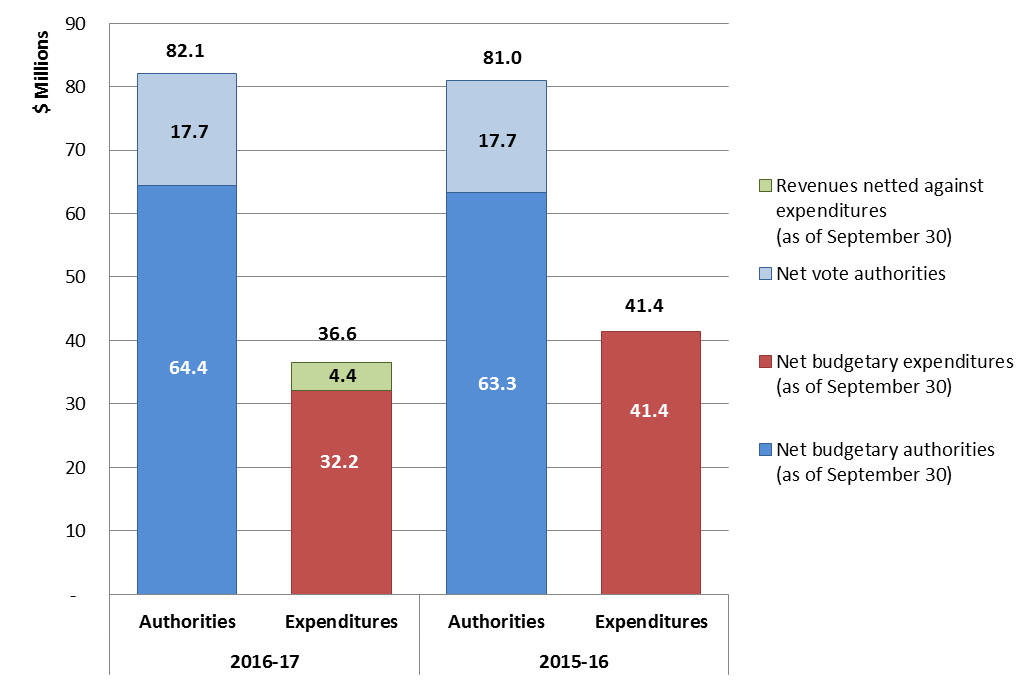 The ATSSC collected $4.4 million in revenues and incurred a total of $36.6 million in expenditures in the first two quarters of 2016-17 for a total of $32.2 million in net budgetary expenditures. This represents 50% of the total budgetary authorities. The majority of the expenditures relates to personnel ($31.5 million), or 86% of the gross expenditures. The remaining 14% primarily comprises professional and special services (mainly legal services and translation costs), transportation and communications (mainly travel costs), and rentals (mainly meeting rooms, software licences and network maintenance costs).

As of September 30, 2016, the total authorities available for use for the year increased by $1.1 million compared to the same quarter last year. This change is primarily due to an increase of $1 million from Treasury Board Central Votes (Operating Budget Carry Forward). For both respective quarters ended September 30 of 2015-16 and 2016-17, the ATSSC’s VNR authority remained unchanged at $17.7 million.

The revenues collected in the second quarter ending September 30, 2016 increased by $4.4 million. The increase can be attributed to a timing difference in the accounting of financial transactions.

Second quarter gross budgetary expenditures decreased from $25.2 million in 2015-16 to $18.1 million in 2016-17. This decrease of $7.1 million consists of variances associated with the following: