This quarterly financial report has been prepared by management as required by section 65.1 of the Financial Administration Act and in the form and manner prescribed by the Treasury Board. This report should be read in conjunction with the 2016-17 Main Estimates and Supplementary Estimates (A). This quarterly report has not been subject to an external audit or review.

These services include the specialized services required by each tribunal (e.g. registry, research and analysis, legal and other mandate or case activities specific to each tribunal), as well as internal services (e.g. human resources, financial services, information management and technology, accommodations, security, planning and communications).

Further information on the mandate, roles, responsibilities and programs of the ATSSC can be found by accessing the 2016-17 Main Estimates.

This quarterly report has been prepared using an expenditure basis of accounting. The accompanying Statement of Authorities includes the ATSSC's spending authorities granted by Parliament and those used by the ATSSC, consistent with the Main Estimates and the Supplementary Estimates (A) for the 2016-17 fiscal year. This quarterly report has been prepared using a special purpose financial reporting framework designed to meet financial information needs with respect to the use of spending authorities.

The ATSSC uses the full accrual method of accounting to prepare and present its annual departmental financial statements that are part of the departmental performance reporting process. However, the spending authorities voted by Parliament remain on an expenditure basis.

For the period ending June 30, 2016, total authorities provided to the ATSSC include the Main Estimates and Supplementary Estimates (A) and totalled $60.9 million. The department also had $17.7 million of vote-netted revenue (VNR) authority for a total spending authority of $78.6 million. The VNR gives the department the authority to make recoverable expenditures on behalf of the Canada Pension Plan and the Employment Insurance Operating Account.

Table 1 below compares the gross and net budgetary authorities and expenditures for the first quarter of 2016-17 and 2015-16. 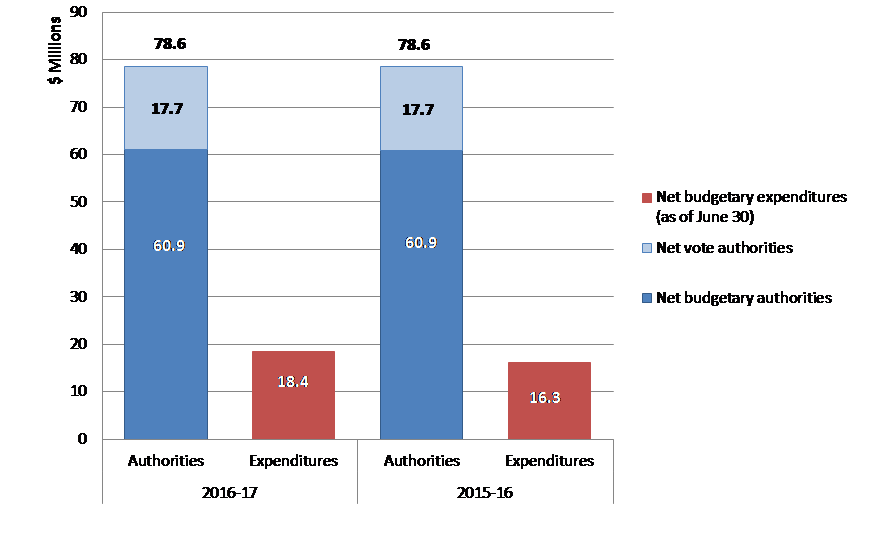 As of June 30, 2016, the total authorities available for use for the year increased by $51 thousand compared to the same quarter last year. The increase is primarily due to a permanent transfer of authorities from personnel to non-salary which resulted in a decrease of $763 thousand in Vote 1—Program expenditures authorities and an increase of $814 thousand in budgetary statutory authorities. For both respective quarters ended June 30 of 2015-16 and 2016-17, the ATSSC’s VNR authority remained unchanged at $17.7 million.

There was an increase of $206 thousand (45%), from $461 thousand to $667 thousand, in other subsidies and payments expenditures, compared to the same quarter last year. This change is due to an increase in the advance payment made to Employment and Social Development Canada (ESDC) for the administration of the Social Security Tribunal.

Lastly, the ATSSC must maintain appropriate delivery capacity to meet the mandates and the evolving needs and priorities of the tribunals it serves. The ATSSC is in the process of developing a comprehensive workforce management strategy as well as a corporate policy framework and a multi-year implementation strategy taking into account identified gaps, risks and priorities.