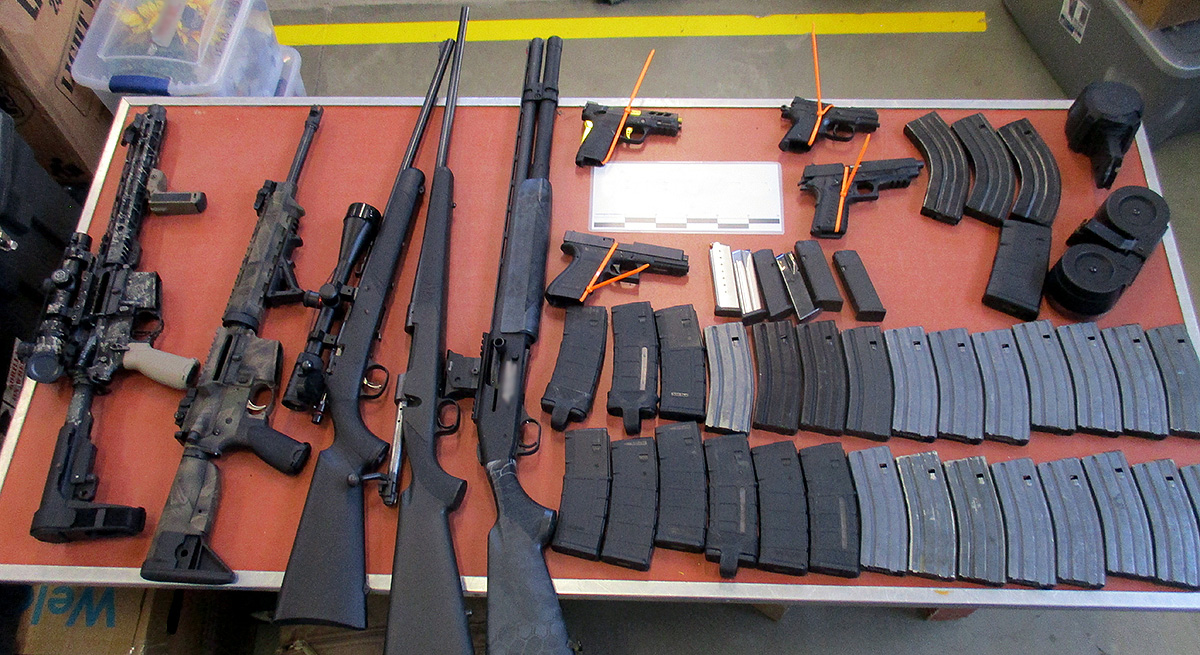 In February, border services officers (BSO) at the Coutts, Alberta port of entry arrested a United States (U.S.) traveller bound for Alaska after locating an undeclared handgun and 21 prohibited magazines for various firearms in the traveller’s truck. 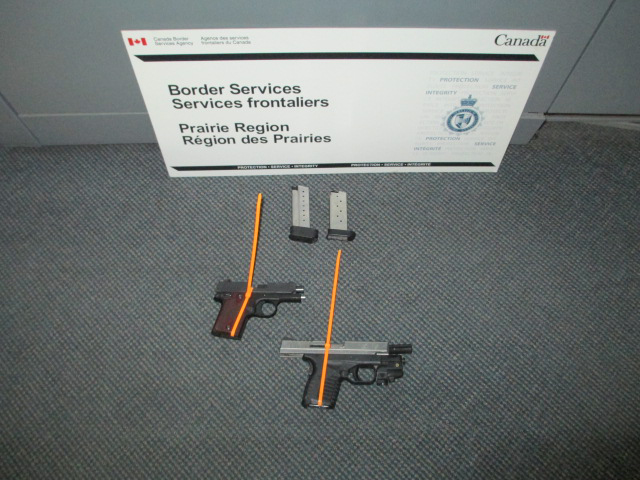 The two undeclared handguns BSOs found in a duffle bag in Northgate, Saskatchewan in February, 2021.

Also in February at the Northgate, Saskatchewan port of entry, a U.S. traveller sought entry for tourism despite COVID-19 restrictions in place and was arrested when BSOs found two undeclared handguns in a duffle bag. Database checks revealed the traveller also had a previous conviction, making the traveller further ineligible to enter Canada. The traveller paid a penalty for failing to declare the guns and returned to the U.S. without them.

In March, the Criminal Investigations Section (CIS) in Calgary filed six charges against a company and owner employing foreign nationals who are not permitted to work in Canada. The case is currently before the courts.

At the Coutts, Alberta port of entry in July, an unemployed U.S. traveller declared that they had no currency in their possession, but officers found they actually had US$10,000 in cash for which a source could not be substantiated. Suspecting it was the proceeds of crime, officers seized the currency with no terms of release and the traveller returned to the U.S. 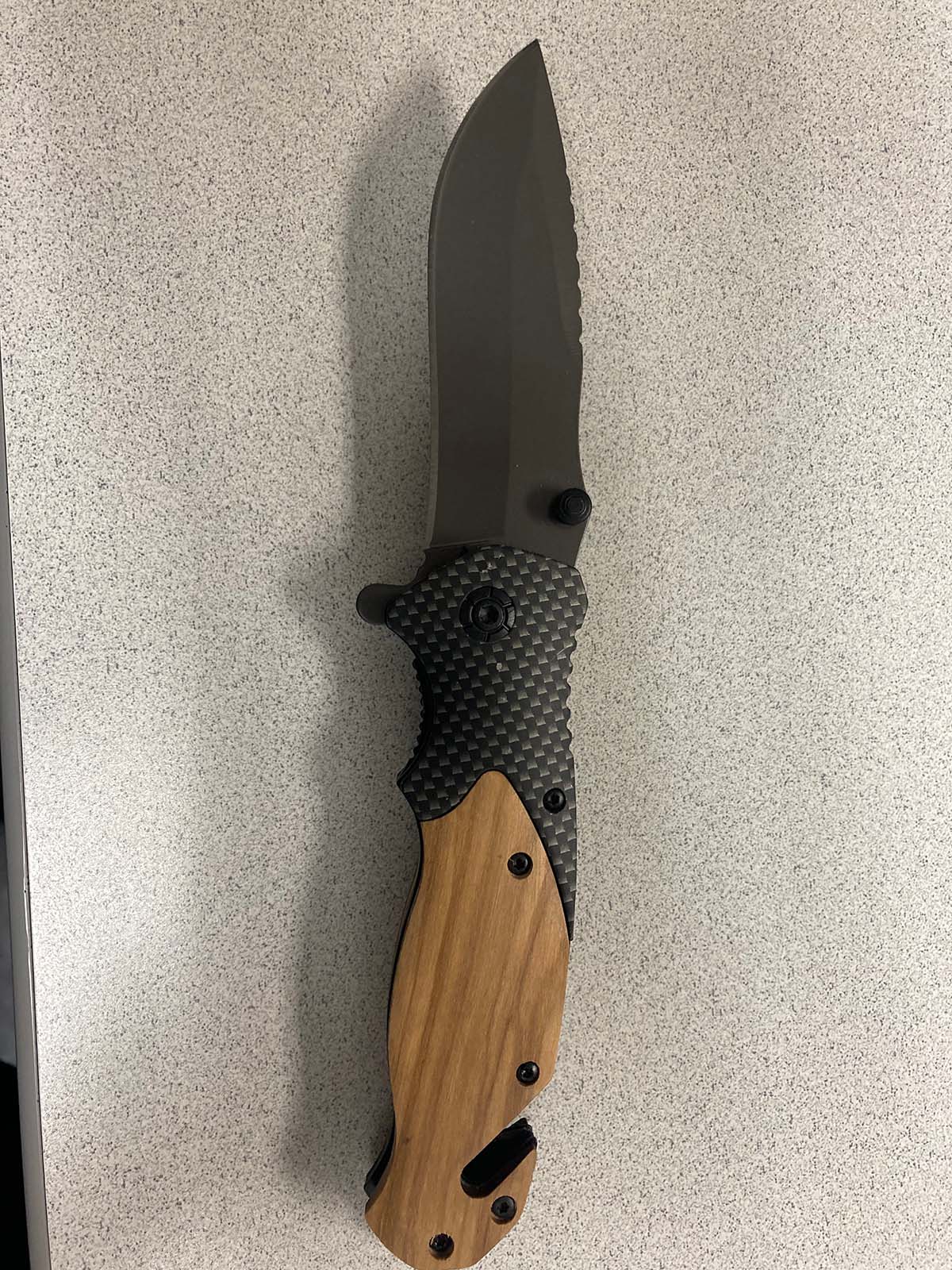 One of the prohibited knives seized by Edmonton Commercial Operations in August, 2021.

Also in July, the Winnipeg Inland Enforcement Division successfully removed a foreign national with a history of attempting to enter Canada illegally. Before being removed, he had served an 18-month sentence after pleading guilty to a Winnipeg Criminal Investigations Section charge for returning to Canada without authorization.

In August, officers at Edmonton Commercial Operations were examining shipments at a courier warehouse, and intercepted and seized a shipment that contained 100 prohibited, spring-assisted knives.

In August, CBSA officers at North Portal, Saskatchewan port of entry were conducting a routine examination of a U.S. traveller who was in-transit to Alaska when they found four handguns, two prohibited assault-style rifles, three non-restricted long guns, and 40 prohibited magazines in the traveller’s truck. BSOs arrested the traveller, returning only the non-restricted guns, and issued $7,000 CAD in penalties before allowing the traveller to return to the U.S.

In August, officers at the Emerson, Manitoba port of entry seized an undeclared and loaded handgun from a U.S. commercial driver. He was arrested, paid a $1,000 penalty, and returned to the U.S. 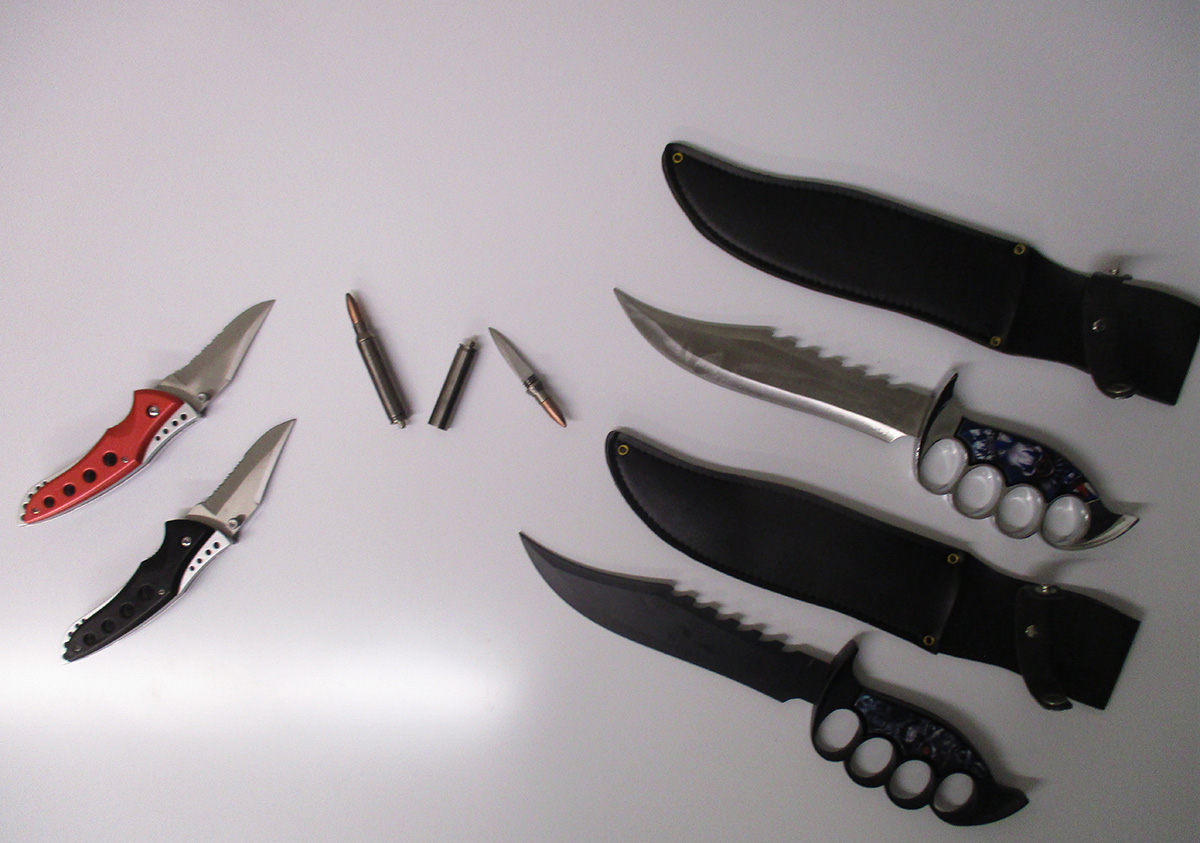 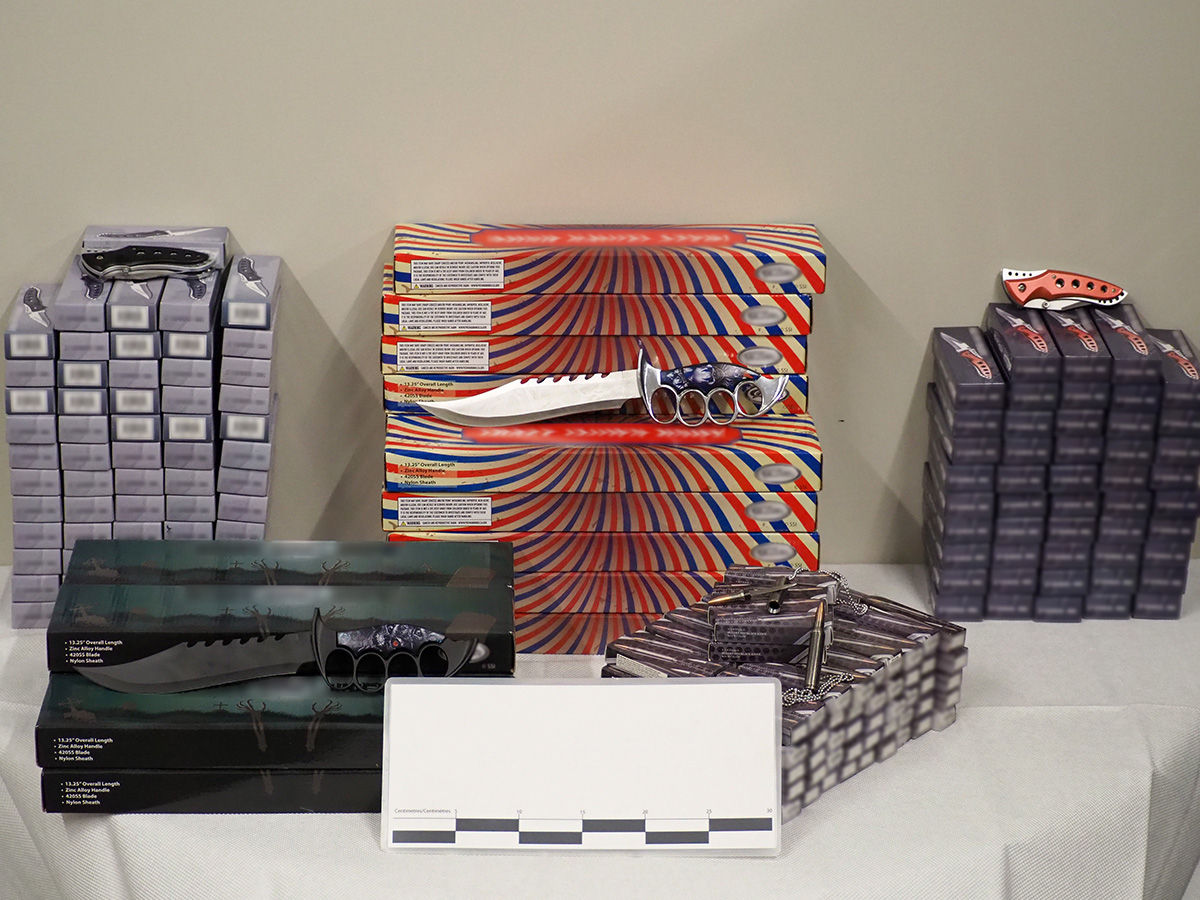 Prohibited weapons seized at the North Portal, Saskatchewan port of entry in October.

In September, Border Services Officers from Edmonton Commercial Operations examined a shipment containing 25 litres of a yellow liquid. Lab results confirmed the substance to be Hydrochloric acid. The liquid is listed as a Class B Precursor in Part 2 of Schedule VI of the Controlled Drugs and Substances Act and, therefore, importations of hydrochloric acid are subject to the requirements of the Precursor Control Regulations.

In October, officers from Calgary International Airport seized 2.58 kg of suspected cannabis in an export shipment at a courier warehouse.

Also in October, officers at the North Portal, Saskatchewan port of entry conducted an offload examination of a semi-truck trailer. Their search uncovered 220 knives and 22 brass knuckles that are classified as prohibited in Canada. As these items were not properly declared, they were seized with no terms of release.

While traveller volumes were again lower in 2021 due to COVID-19 travel restrictions, officers in the Prairie Region still processed approximately 486,087 commercial trucks, and 8,937,373 courier shipments, as well as 1,040,075 travellers. From January 1 to October 31, the region also released 2,546,040 commercial shipments.

The CBSA collects customs duties as a way to protect certain sectors of the Canadian economy. The CBSA also uses Administrative Monetary Penalty System (AMPS) to issue monetary penalties to commercial clients for violating CBSA's trade and border legislation, such as failure to pay duties.

The CBSA conducted tariff classification verifications that revealed errors in the classification of goods classified as flashlights by an importer in January 2021. As a result of this review, and the client’s self-corrections, the importer was assessed $396,964 in duties, taxes and penalties for payment.

The CBSA completed a national priority valuation verification on footwear that determined a non-resident importer was in violation of program conditions. After corrections and penalties, the importer had to pay $224,846.67.

Officers at the North Portal, Saskatchewan port of entry were processing a Canadian resident who was returning from the U.S. with a horse in April. The traveller was not truthful about the horse’s origins, then showed a false receipt with a much lower value than was paid. These actions resulted in the traveller paying $17,350 CAD in penalties when they would have only paid about $800 CAD in GST if the traveller had provided a truthful declaration from the start. 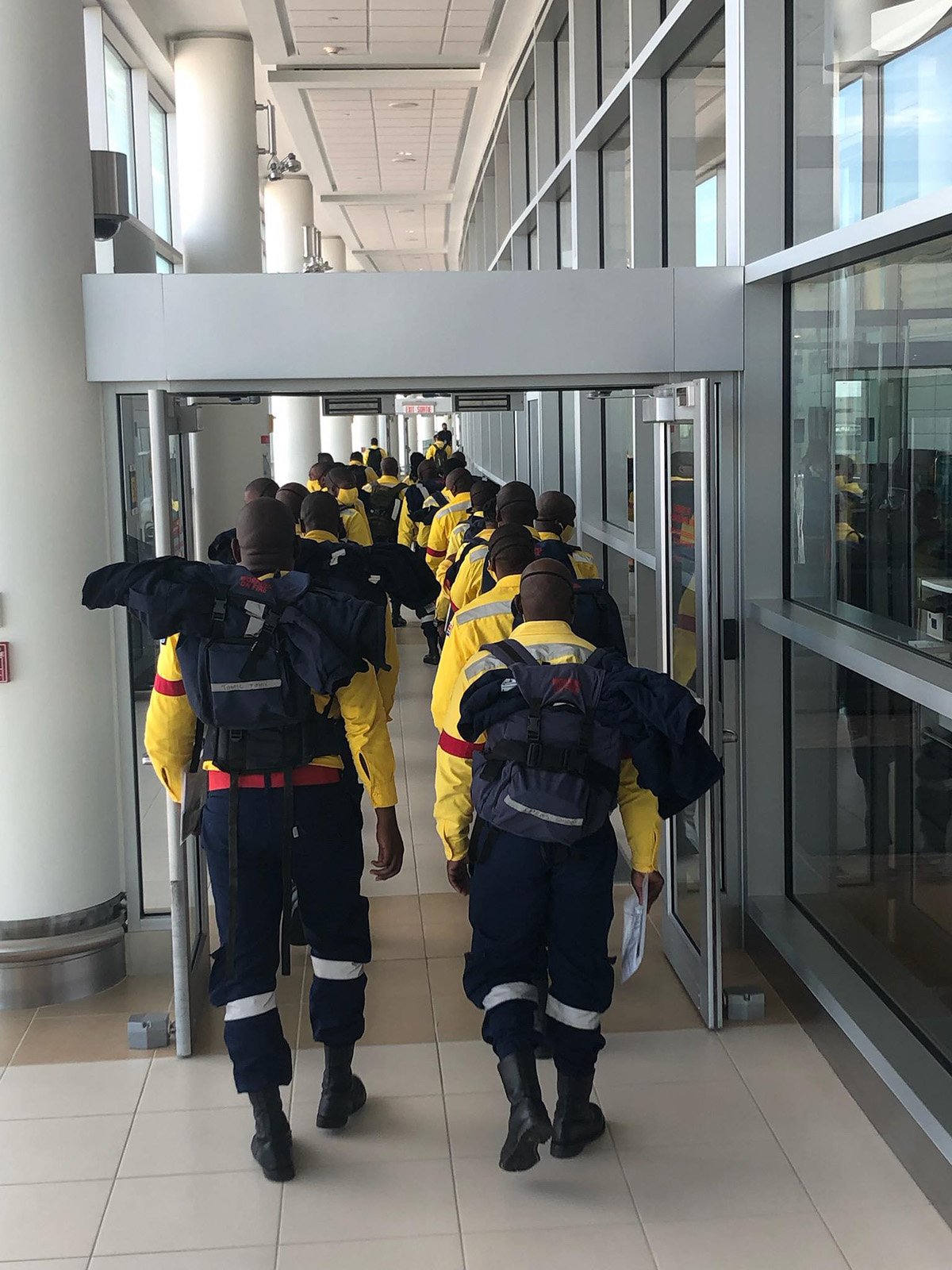 The CBSA facilitated the expedited entry of South African firefighters supporting the Manitoba Government in efforts to fight wildfires.

In April, the Prairie Region Border Information Service reached the significant milestone of providing service to 1 million callers and responding to over 76,000 ‘Contact Us’ emails since the implementation of COVID-19 border measures in March 2020.

In July, officers at Calgary International Airport facilitated the repatriation and clearance of two Na-to-wa-piists (sacred items) back home to the Siksika Nation in Treaty 7 territory in Canada: a Prairie Chicken Society Headdress and a Weather Dance Robe.

For more information or to schedule an interview with regional CBSA representatives, please contact: