Royal Portraits and Use of Images

If you wish to use or reproduce royal portraits and images, please read this section carefully, as legal limitations apply. 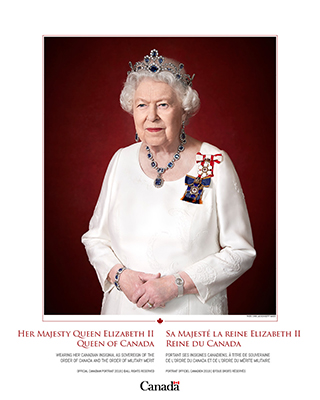 The Royal Arms, the Crown and the Royal Cypher are personal to members of the Royal Family and cannot be used without their consent.

Requests for use of such emblems should be addressed to the Advisor, Protocol and Special Programs, Policy, Program and Protocol Branch, Government House (1 Sussex Drive, Ottawa, K1A 0A1), accompanied by a sketch or drawing showing the intended uses.

Advice will be sought from the Manager, State Ceremonial and Protocol Directorate, Department of Canadian Heritage, before the request is sent to the Lord Chamberlain's Office at Buckingham Palace for final approval.

The following rules govern the use of the Royal Arms, crest, standards, photographs, portraits, engravings, effigies and busts of The Queen and members of the Royal Family for commercial purposes.

The Lord Chamberlain’s Office has developed the following policy on the use of Royal Images: “…Generally, except when advertising a book, newspaper article or magazine article about a Member of the Royal Family, Royal Images may not be used for advertising purposes in any medium. A firm’s advertisement may not include photographs of Members of the Royal Family visiting their works or exhibition stands or being publicly involved with their goods or services”. For example, if Their Royal Highnesses The Duke and Duchess of Cambridge were to visit a cheese shop, that shop could not use a photograph of the occasion to advertise its goods.

These rules are made to avoid unfair exploitation of the Royal Family by commercial organizations for their own advantage.

Royal Images should not be used on adhesive seals, articles of dress, household linen, packaging, boxes or labels.

Royal images may be used for the following provided they are free from advertisement:

Except when advertising a book, newspaper, magazine article or television documentary about a Member of the Royal Family, royal images may not be used for advertising purposes in any medium.

A firm's advertisement may not include photographs of Members of the Royal Family visiting their works or exhibition stands, or of being publicly involved with their products. Publication of film or photographs of such visits may, however, be used for House Journals or for specifically in-house purposes.

Requests relating to the use of royal images in advertising should be addressed as follows:

Note: A sketch of the intended use must be sent for approval.

Any question of copyright involved in the reproduction of a royal image must be settled by the prospective user direct with the copyright holder. Nothing in these rules gives any right to the use of a particular image.