Have a question about Canadian democracy? This section will help you learn more about Canada’s democratic institutions, how they function and why. It will also provide you links to documents central to Canada’s democracy such as the Constitution and the Charter of Rights and Freedoms. You may also follow links to longer, more detailed education resources to read at your leisure.

Our system of government is a constitutional monarchy and a parliamentary democracy. Canada’s Parliament consists of three parts: the King, represented by the governor general; the Senate; and the House of Commons.

About the House of Commons

The House of Commons plays an important role in Canada’s system of government: it debates issues, votes on the passage of laws and ensures the Government is held accountable.

Members of Parliament (MPs) sit in the House of Commons to represent their local communities, known as electoral districts, also commonly referred to as constituencies or ridings.

In Canada’s system, the Prime Minister and Cabinet sit in the House of Commons:

The Senate’s fundamental role is to be a complementary legislative body to the elected House of Commons in providing sober second thought. In that role, the Senate acts essentially as a reviewing chamber on proposed bills before they are passed.

The Canadian Constitution provides that the Senate has 105 appointed members divided among provinces and territories. The power to appoint Senators rests with the Governor General. By constitutional convention, the Governor General’s power is exercised on the advice of the Prime Minister.

About the Governor General

His Majesty Charles III is King of Canada and Head of State. The Governor General is the representative of the King in Canada. The Canadian Constitution places executive power in the King. However, in practice this power is exercised by the Prime Minister and his ministers.

Conventions are rules of the Constitution, however, they are not enforced by the courts because they are not laws. For example, most of the rules of responsible government are to be found through constitutional conventions rather than the written Constitution. Conventions also limit the Governor General’s powers. As another example, the Governor General must appoint as Prime Minister a party leader who is certain or likely to command a majority in the legislature.

About the Division of Powers between federal and provincial governments

There are three levels of government in Canada:

Each level has different areas of responsibility, which can be identified based on geography and types of services. The federal government creates laws and manages programs and services that tend to affect the whole country; the provincial and territorial governments have powers to make decisions relating to areas of law that affect their province or territory directly; and the municipal governments are responsible for establishing by-laws and services that are administered in a specific city, town or village. Both the federal and provincial and territorial areas of responsibility are listed in the Constitution Act, 1867.

When Canadians go to vote:

How you are represented

The candidate who gets the most votes in your electoral district wins. The winning candidate goes to represent you in the House of Commons. This is what we call the First-Past-the-Post (FPTP) system.

The political party that wins the most seats in the House of Commons usually forms the Government: 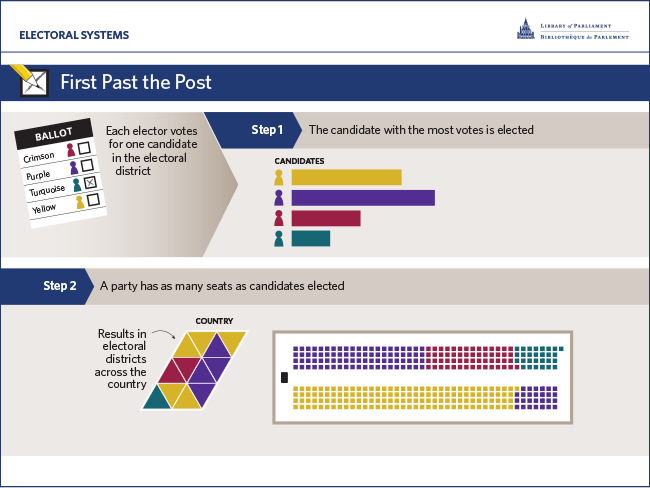 Elections usually happen every four years, unless a majority of Members of Parliament (MP) in the House of Commons determine they no longer want to support the Government on a matter of “confidence”.