From: Department of Finance Canada

The METR is an estimate of the level of taxation on a new business investment, and takes into account federal, provincial and territorial statutory corporate income tax rates, as well as other features of the corporate tax system.

Analysts may use different metrics to compare taxation levels across countries. The statutory corporate income tax rate - also called the "headline rate" - provides a high-level measure of income taxes payable by a profitable corporation. However, this method does not account for differences in the definition of taxable income, the availability of tax incentives, as well as other taxes that corporations may have to pay (sales taxes, capital taxes, and so on).  For this reason, it can be advantageous to use more comprehensive ways of measuring tax competitiveness.  Such metrics include the average effective tax rate and the marginal effective tax rate (METR). This backgrounder focuses on the METR.

The METR is an estimate of the level of taxation on a new business investment, and takes into account federal, provincial and territorial statutory corporate income tax rates, as well as other features of the corporate tax system. These other features include investment tax credits and key deductions, such as capital cost allowances. The METR also takes into account other taxes paid by corporations, such as capital taxes and unrecoverable sales taxes paid on capital purchases.

The METR is particularly useful for making comparisons among nations and sectors of the economy. Since the METR takes many factors into account, it provides a broad indication of overall tax competitiveness that is an important supplement to comparisons of statutory tax rates. METRs also provide a valuable historical perspective.

This backgrounder uses METRs to examine Canada's business tax competitiveness relative to the U.S. and other countries of the Organisation for Economic Co-operation and Development (OECD) as a result of tax changes announced in the 2018 Fall Economic Statement and the important tax changes announced by the United States in December 2017. The conclusions can be summarized as follows:

METRs are estimated on the basis of an economic model of an investment, which relies on a variety of assumptions about economic conditions and the parameters of the investment. In order to compare Canada's METR with that of other countries, the Department of Finance METR model applies the tax system parameters of other countries to Canada's economic structure and conditions (rate of return, inflation, economic depreciation, composition of capital investments, debt/equity ratio, etc.).2 Therefore, it represents what the tax burden in Canada would be if the tax system of another country were put in place in Canada. This isolates the impacts of variances in the tax law from other macroeconomic differences across countries. In practice, the METR of a particular investment would vary based on the specific characteristics of the investment. In most cases, this document focuses on the overall METR associated with a typical or average investment for the economy as a whole. However, it also provides finer estimates of METRs by sector and type of asset.3

METRs are calculated on the assumption that a taxable firm makes an investment that is small relative to its ongoing operations. As a result, it is assumed that the firm can always apply the deductions and credits earned on a new investment against taxable income earned on earlier investments. It is also assumed that the investment just earns a rate of return sufficient to reward the suppliers of capital – a "normal" rate of return.4 Consequently, METRs can be used as a measure of competitiveness, balancing the impact of a range of tax costs against incentives to invest. They are an important supplement to comparisons of statutory income tax rates.

The methodology used to determine the METR is based on the methodology presented in "Marginal Effective Tax Rates on Business Investment: Methodology and Estimates for Canadian and U.S. Jurisdictions," published by the Department of Finance in the 2005 Tax Expenditures and Evaluations report.5 The economic parameters have been updated to reflect the most recent structure of the Canadian economy in terms of industrial structure, the characteristics of the stock of capital, and evolving tax parameters of countries.

On November 21, 2018, the Government announced a set of measures aimed at improving Canadian business competitiveness, as part of the Fall Economic Statement.

The 2018 Fall Economic Statement announced the adoption of immediate expensing of machinery and equipment used in the manufacturing and processing of goods, as well as specified clean energy equipment. Additionally, the Fall Economic Statement announced the Accelerated Investment Incentive, which allows businesses to claim up to three times the amount of the deduction normally applicable in the first year6.

Provinces and territories that are part of a corporate Tax Collection Agreement (all provinces other than Quebec and Alberta) are required to adopt the federal measures, as they affect the amount of taxable income earned by corporations. Following the publication of the 2018 Fall Economic Statement, Quebec announced the introduction of an enhanced capital cost allowance which, similarly to the Accelerated Investment Incentive, allows businesses to claim up to three times the amount of the deduction normally applicable in the first year for investments made before 20287.

Evolution of the Canadian METR and its Components

Between 2000 and 2012, the average Canadian METR declined significantly and is now about a third of its 2000 level. Throughout the period from 2012 to the present, Canada has had either the lowest or second-lowest rate in the G7.8

In addition, actions implemented by provincial government have also contributed to the decline of Canada's METR, including:

At the end of 2017, the "Tax Cuts and Jobs Act" was enacted in the U.S., introducing reforms to both personal and corporate tax systems.

On the corporate tax side, the new law includes a number of measures aimed at enhancing business competitiveness. These include a reduction in the federal corporate income tax rate from 35 per cent to 21 per cent, and temporary immediate expensing of capital assets with a normal recovery period of 20 years or less. These measures are partially offset by measures that broaden the tax base, including restrictions on the use of net operating losses, a requirement to amortize R&D expenses over a longer period of time, and limitations on the deduction of net business interest expenses.

States can choose whether or not to incorporate tax changes implemented at the federal level. While some states directly incorporate the provisions of the federal Internal Revenue Code by reference, most states must enact new legislation to adopt federal changes. In the case of the temporary immediate expensing of capital assets with a useful life of twenty years or less, only 16 states accounting for approximately 17 per cent of U.S. GDP adopted these bonus depreciation rules. 9 The U.S. METRs presented in this backgrounder were calculated taking into account the varying degrees of state conformity to the tax changes announced in the U.S.. 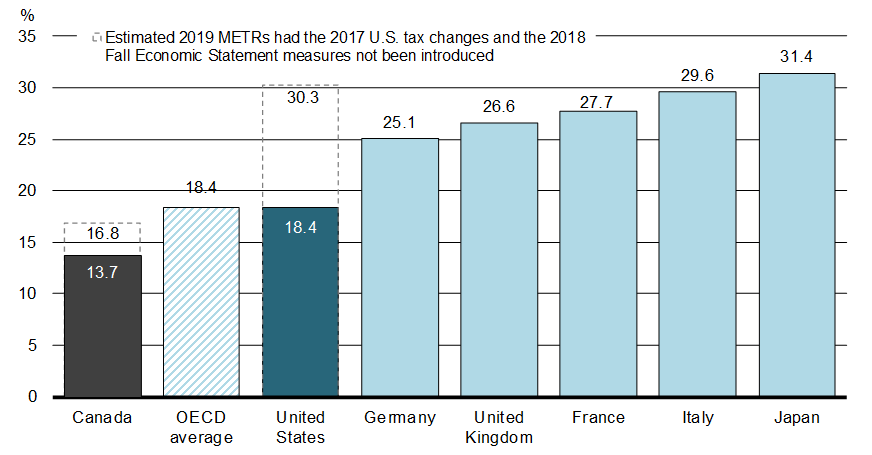 Chart 2 also shows that the overall Canadian METR is below the OECD average METR, and is the lowest in the G7.

Looking ahead, coming changes to statutory tax rates in France and the United Kingdom will affect certain METR rankings, but will not affect Canada's position:

Given that many businesses have the option of investing in either the U.S. or Canada, this section analyses in more detail the impacts of the 2017 U.S. tax changes and 2018 Fall Economic Statement measures on the U.S. and Canadian METR estimates.

Chart 3 shows the decomposition of the overall Canadian and U.S. METRs, and the sources of each country's competitive advantages.13 Specifically:

As illustrated in Chart 4, the Canadian and U.S. METRs vary across industries.

The METR is a comprehensive metric, which takes into account not only the rate, but also other key features of the tax system of a country that apply to new capital investment.

The Canadian METR is competitive vis-à-vis the U.S. and other G7 and OECD countries as a result of numerous federal and provincial actions introduced since 2000. An important source of the METR advantage compared to the U.S. is the widespread utilization of value-added taxes in Canada.  In addition, the measures introduced in the 2018 Fall Economic Statement have reduced the Canadian METR to its lowest level since 2000, at 13.7 per cent. In certain industries, such as manufacturing and processing, the Canadian advantage is even more significant, with a METR of just 3.1 per cent.

Chart 5 shows a disaggregation of the METR by grouping of assets:

2 Part of the variability across METR estimates published by different authors can be explained by the taxes that are included in the calculations and the underlying economic assumptions used. For instance, the Department of Finance METR model includes highly disaggregated non-refundable sales tax information, whereas most METR publications do not. Also, some METR estimates include land transfer taxes and property taxes, which are excluded in the Department of Finance METR model, because it provides an incomplete picture of municipal-level taxes.

3 Some METR publications may include resource or financial sectors in their calculation, however both sectors are excluded from the Department of Finance METR model. Since rents are typically present in these sectors, it is debatable whether METR estimates, which assume no rents, are an appropriate metric.

4 Individual firms may possess scarce assets like intellectual property, innovative production techniques, valuable brand recognition or market protection that enable them to earn above-normal returns. The METR is not adapted to these situations.

5 See "Marginal Effective Tax Rates on Business Investment: Methodology and Estimates for Canadian and US Jurisdictions".

6 The Accelerated Investment Incentive, as well as the immediate expensing for clean energy equipment and for machinery and equipment used in the manufacturing and processing sector, applies to assets acquired after November 20, 2018 and it will be gradually phased out starting in 2024, and no longer in effect for investments put in use after 2027.

7 In the case of computer hardware, manufacturing and processing equipment, clean energy generation equipment and intellectual property, the depreciation rate was increased to 100% and a new permanent additional deduction of 30% was announced.

9 In Italy, the elimination of the Allowance for Corporate Equity (ACE) and the expiration of additional depreciation for certain assets (i.e., "super depreciation") has resulted in a substantial increase in the Italian METR to 29.6 per cent from 16.2 per cent.

10 The U.S. METR estimates assume that limits on interest deductibility, which were significantly tightened under the U.S. tax changes, do not apply.

11 See Annex 1 for a more detailed breakdown of the METR by asset type.

12 Taxation at the municipal/local level has not been included in the METR analysis.

13 Many states offer an exemption or partial exemption on business purchases but, in most cases, these exemptions are limited to a few specific sectors and/or assets. For example, many states provide a sales tax exemption for machinery and equipment purchased by manufacturers and used exclusively in the production process. These exemptions do not extend to other types of assets such as office equipment, vehicles or building materials purchased by the manufacturing sector. Overall, it is estimated that the effective sales tax rate on machinery and equipment is 4.4% in the U.S. and 0.5% in Canada, while on buildings it is 2.6% in the U.S. and 0.5% in Canada.

14 In Canada, capital cost allowance rates are generally set so that deductions are spread out over the useful life of an asset. This promotes the accurate measurement of income for tax purposes, as well as neutrality with respect to investment decisions. Overall, Canada's depreciation allowances are more generous than those in the U.S., in the absence of immediate expensing.

15 The Atlantic Investment Tax Credit contributes to the low Canadian METR in the manufacturing sector. Considering that eligibility for this credit is based on the region of investment, it is also relevant to consider the Canadian METR without the impact of this credit: the exclusion of the Atlantic Investment Tax Credit increases the Canadian METR in the manufacturing sector to 5.5 per cent, which is still significantly lower than the U.S. METR.

16 The Tax Foundation, Fiscal Fact No. 631 "Toward a State of Conformity: State Tax Codes a Year After Federal Tax Reform" published on January 28, 2019 indicates that only 16 states had adopted the immediate expensing provision.