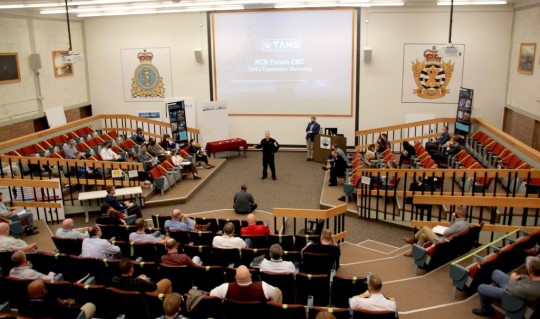 The Royal Canadian Navy (RCN) is taking a novel approach to ensure its future warship – the Canadian Surface Combatant (CSC) – will meet the needs of the next generation of sailors.

A group of 55 personnel – sailors, Air Force personnel and industry representatives – recently took part in a workshop to mine their perspectives in order to fuel the design for the CSC project.

In his remarks at the opening of the workshop, Rear-Admiral (RAdm) Brian Santarpia, Commander Maritime Forces Atlantic and Joint Task Force Atlantic, said that bringing together such a diverse group of participants offered an opportunity to “leverage outside views and expertise” in a way not previously done before.

RAdm Santarpia also noted that while many aspects of maritime operations remain constant, the ships will be sailing into an ever-changing geopolitical environment, with new threats and rapidly evolving technological advancements.

“Using workshops such as these, combined with full-scale models and simulated warfare scenarios, will ensure that RCN sailors are best positioned to defeat threats in an evolving and challenging security environment,” said Mr. Jeff Hutt, one of the project planners at the CSC Project Management Office.

The operations room has been a focus for the project team when preparing for the future. The workshop participants’ input at this early stage will help hone the designs for the ships’ systems and layouts, ensuring that future needs are reflected.

“The importance of optimizing the design of the operations room is really making the most of both the combat equipment and the operator together,” said Mr. Hutt.

Organized by CSC project planning personnel, the workshop ran from May 16 to 19, 2022, at the Canadian Forces Maritime Warfare Centre in Halifax. It was facilitated by a team from Tactical Advancements for the Next Generation (TANG), a program from Johns Hopkins University’s Applied Physics Laboratory.

“This work will also enhance Canada’s maritime integration with our closest allies so that Canada can work collaboratively with our partners to advance security and stability,” said Mr. Hutt.

Before breaking into smaller groups, the TANG team gave a brief overview of research carried out last fall, when some of their members spent time aboard Her Majesty’s Canadian Ship Toronto. They interviewed more than 70 personnel, learning more about how a warship’s design details can affect the crew, both in their use of the physical space and its impact on communication flow and operations.

For the next two days, participants discussed a variety of different future scenarios in their small groups, working under the guidance of workshop facilitators who encouraged them to think about “all the ways design can support the crew and mission performance.”

At the end of the event, Mr. Hutt said the TANG team did a great job of encouraging innovative ideas, in particular on the theme of information sharing capabilities and how technology can eventually improve that process in the new ships.

“The work now is to break these down into actionable items in terms of design,” he said.

The CSC will replace Canada’s Halifax-class frigates and the retired Iroquois-class destroyers; plans are for a new fleet of 15 warships.

The first of 15 ships is expected to begin construction in 2023, with anticipated delivery in the early 2030s. Delivery of the remaining ships will continue into the 2040s.

With files from Joanie Veitch