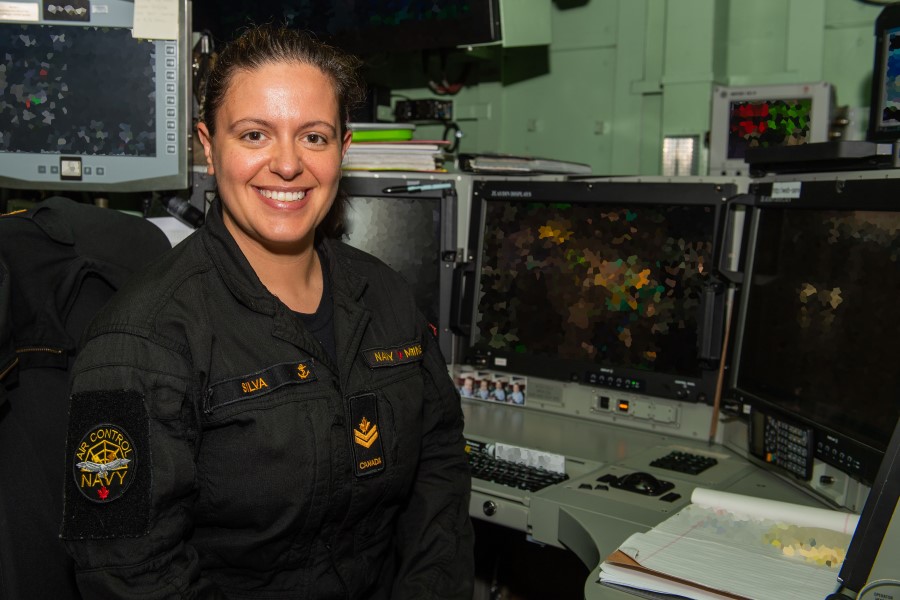 Master Sailor (MS) Jessica Silva has reached a milestone that few in her field have attained – she logged over 1,000 hours in her role as Shipborne Air Controller (SAC) while participating in Rim of the Pacific (RIMPAC) 2022 on board Her Majesty’s Canadian Ship (HMCS) Vancouver.

“It was pretty exciting; it’s really rewarding to hit such a huge milestone,” said MS Silva.

“Through my hours controlling aircraft I have gained a lot of knowledge that I can teach to others. I hope it helps me achieve my main goal of becoming a Sea Training SAC.”

MS Silva is the first Sonar Operator (Sonar Op), and only the second SAC on the West Coast, to achieve 1,000 hours of control time. Serving as a SAC for the past six years, she took the opportunity to be trained in the field as soon as she was eligible.

“It looked like the most interesting and real job in the Operations Room,” she said, recalling how the choice to take the course was rooted in her desire to be part of air operations on board the Halifax-class frigates.

During exercises, many of the positions in the Operations Room work with computer simulated inputs, but the SAC is often controlling the embarked helicopter.

“Everything you do is real – real helicopter, real people, real mission – nothing is pretend,” she added. “There’s rarely a dull moment in the job.”

At sea, the SAC is the main link between the ship and its embarked helicopter. Air Controllers give pre-flight briefs to the crew with all the information they need to accomplish their mission. While the aircraft is in the air, a SAC is responsible for tactical control of the helicopter, as well as fixed wing marine aircraft.

The role is open to operators from naval trades that include Sonar Op, Naval Combat Information Operator and Naval Electronic Sensor Operator. The job is similar to an Air Traffic Controller; however, SACs also provide radar or tactical control when air crews are unable to detect threats.

MS Silva holds the SAC category of NATO B, the second highest possible category for a Navy controller, and a qualification recognized internationally. She is close to achieving NATO A status.

Having a background as a Sonar Op made the training more challenging – it’s one of the few operations trades that doesn’t use the computer software required for SACs to do their job. MS Silva had to learn to navigate it on her own time in order to keep up with the course training.

“It can be a challenge as a Sonar Op filling the role because I wasn’t trained on the Combat Management System like other ops trades are,” she explained. “I almost had to learn two things at once.”

MS Silva began studying for the SAC course three months before attending and has continued seeking knowledge since. Completion of the SAC course grants a NATO SAC Grade of D, but continuing to progress requires the completion of an in-depth training package and passing an intensive exam.

The challenge for her has been worth it, as along the way MS Silva has controlled helicopters from multiple NATO allies, as well as embarked CH-124 Sea King and CH-148 Cyclone helicopters.

Throughout her career, which has included five deployments, three of them as a SAC, she said she wouldn’t have done anything differently.

MS Silva joined the Royal Canadian Navy in 2012. Recruited out of Winnipeg, she joined with a desire to see the world.

“I’ve travelled to over 35 countries and been to Hawaii over 30 times. You’ll go to places you’ve never dreamed of.”

Now that RIMPAC 2022 is over, MS Silva is continuing on with HMCS Vancouver as the ship deploys on Operations Projection and Neon.