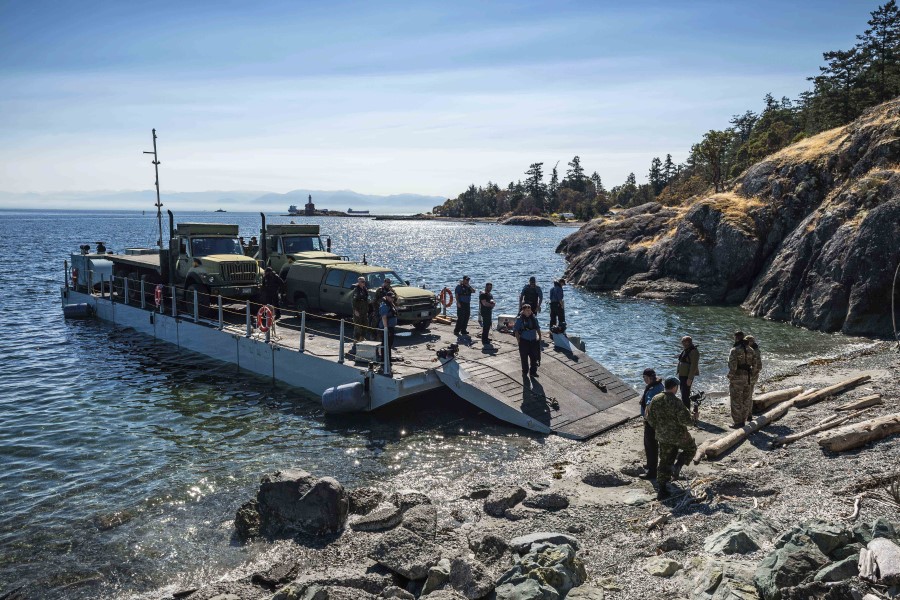 A ground-breaking capability for the Royal Canadian Navy (RCN) is one step closer to reality as a new phase of training for four modular, self-propelled barges designed to support the future Joint Support Ships (JSS) was recently completed.

Called sea-to-shore connectors, these barges can move large quantities of mission-essential equipment, stores and personnel to and from shore quickly, and can be stored or transported like standard shipping containers. They have multiple uses and configurations and are engineered to be assembled from the JSS itself.

In October, 18 sailors including boatswains and marine technicians, concluded five weeks of collaborative training in Esquimalt, B.C., with instructors from the Defence College of Logistics, Policing and Administration in the United Kingdom (UK).

The Royal Navy has had a similar capability for over 60 years and the UK team was able to provide expert knowledge and advice about the new equipment – from myriad operational uses to technical repairs.

“We originally wanted help in using the sea-to-shore connector tactically, but we have tapped into the UK’s knowledge and opened a full Pandora’s box in what can be done with them,” says Lieutenant-Commander (LCdr) Rowan Wilson, Executive Officer and Staff Officer New Capability and Training at Naval Personnel and Training Group (NPTG) Headquarters. “We are currently just scratching the surface of this cool new capability and hopefully it will get more people excited about what the Navy is doing.”

The first of the four barges, built by Navamar of Montréal, has already been delivered to Esquimalt. Three more barges are expected over the next 12 months – two more on the West Coast and one on the East Coast.

LCdr Wilson is particularly enthused about the potential for a new, non-combat amphibious capability as the new barges can be driven right up to a beach with their roll on-roll off ramp extended if no dock or jetty exists.

“The collaborative training with the UK instructors showed us the exponential possibilities of the sea-to-shore connectors. One thing that immediately came to light is that this is not just a new piece of equipment for the RCN, but an exciting return to a non-combat amphibious capability we haven’t had in decades.”

Petty Officer 1st Class (PO1) Shawn Beckett, a boatswain for 29 years currently employed at the Naval Fleet School (Pacific) Seamanship Training Centre in Esquimalt, found working with instructors from the UK “extremely beneficial, due to their vast wealth of knowledge.”

“They were also a fun group to work with, which made you feel part of a team, not just them as instructors and you as a student. I came to understand that there is a lot more that goes into preparing for and executing a beach landing than one would assume. It was quickly learned that the barge with the right team will be a phenomenal asset to the RCN.”

PO1 Beckett says when he first became involved in this project, he didn’t think it was particularly ground-breaking, but that soon changed.

“Since learning of the purpose and plans for this new equipment, I’m excited to see what the real-life applications will be and how it can be utilized in the future for humanitarian aid, interoperability with the Army and other situations as they arise.”

While the sea-to-shore connector’s primary use is as a self-propelled barge that can travel in speeds up to five knots, it can also transform into a bridge, a floating dock, or a diving platform for salvage. In addition, it can be deployed as a standalone unit in support of humanitarian assistance, disaster relief or evacuation operations, at home or abroad.

The barge’s engines, ramps and safety equipment will be stored in two separate 20-foot containers aboard the new JSS. The 12 pontoons can be stored like sea containers.

When required, the pieces of the interlocking pontoon system and two Thrustmaster engines can be lowered into the waters of protected harbours and inlets by the JSS’s crane. The connecting pieces are pushed together by rigid-hulled inflatable boats and then locked into place. The barge has a reinforced steel hull and can hold up to 81 tonnes of supplies, vehicles, equipment or personnel.

Master Sailor (MS) Christopher Cale, a marine technician who also took part in the recent training, said the UK team had a lot of insight into the different uses of the sea-to-shore connector, and was critical in helping to repair one of the thrust modules when a leak developed in a propeller seal.

One of the new capabilities that most impressed MS Cale, who works as an instructor at the Naval Fleet School (Pacific) Damage Control Division in Esquimalt, was the ability to load a crane on board the barge and use it to remove and install a new dive compressor at the Fleet Diving Unit.

“This will definitely add a unique, versatile capability that we currently don’t have in the fleet,” he says.

Until the JSS begin arriving in 2025, sailors will maintain skills by conducting periodic refresher training with the sea-to-shore connector, continuing collaborative training opportunities with the UK, and plotting the way forward in terms of how the barges can be used most effectively by the RCN.

“When we talk about military capability, we envision personnel and equipment – but it’s the training that transforms these two elements into a capability,” adds LCdr Wilson. “Consequently the sea-to-shore connector training will perpetuate itself through our institutions to enable future generations of sailors to operate the barges safely, competently and with confidence.”