Benefits extended to members of the Order by the French

In 2017, the Société nationale d'entraide de la Médaille Militaire (in French only) (SNEMM) of France, in order to show its gratitude to Canada’s military contribution in France during the two world wars and to establish a link between two of our nation’s respective highest military honours, generously offered to extend the benefits open to its members to the members of the Order of Military Merit. 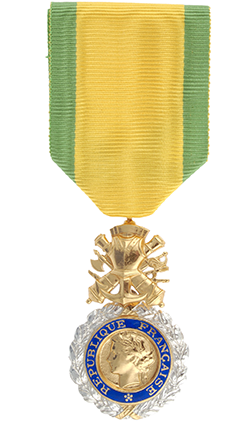 The Médaille Militaire was created by Louis-Napoléon Bonaparte, Prince-President and future Napoléon III in 1852 and is France’s second highest honour. The SNEMM is an association of its recipients.

The arrangement between the SNEMM and the Order was formalized through the signature of a Convention signed by Lieutenant-General Charles A. Lamarre, then Commander of Military Personnel Command, and Mr. Jean-Pierre Martin, then President-General of the SNEMM, at National Defence Headquarters (Carling) on 10 May 2018. After a hiatus caused by the world-wide pandemic, and on the occasion of the 170th anniversary of the Médaille Militaire and the 50th anniversary of the Order of Military Merit, the arrangement was refreshed and given new life through the signature of a new Déclaration d’intention de collaboration (Declaration of intent to cooperate). This new Declaration was signed in the Hall of Honour of National Defence Headquarters (Carling) on 28 April 2022 by Lieutenant-General Frances Jennifer Allen, CMM, CD, Vice-Chief of the Defence Staff and Mr. Christophe Raisonnier, National Administrator assigned by the President-General of the SNEMM, Mr. José Miguel Réal.

The Declaration includes some clauses related to cooperation and these are still being negotiated between the two countries. These clauses include:

There are also specific clauses related to advantages for individual members of the Order of Military Merit and these are still being negotiated between the two countries. These clauses include:

All the above individual advantages are still being negotiated between the two countries and more information will be made available once negotiations have concluded.

Their offices are open for 9 am to noon and from 1pm to 5pm from Monday to Friday.