The official description, eligibility, criteria, and history of the Canadian Forces' Decoration (CD). 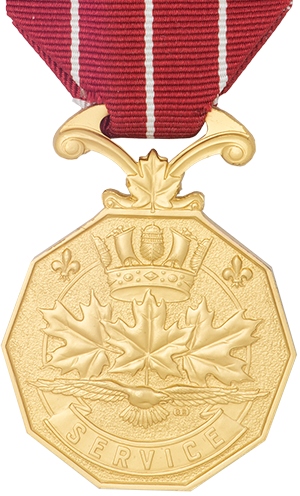 The decoration is awarded to the regular forces, reserve forces, officers of the Cadet Instructors Cadre (CIC), Canadian Rangers, and holders of honorary appointments in the CF. Service in the regular and reserve or auxiliary forces of the British Commonwealth of Nations will be counted towards the medal if the final five years have been served with the Canadian Forces and no other long service, good conduct, or efficiency medal has been awarded for the same service. The medal may be awarded to persons in possession of any long service, good conduct, or efficiency decoration or medal clasps, provided that the individual has completed the full qualifying periods of service for each award and that no service qualifying towards one award is permitted to count towards any other. The service need not be continuous. This award supersedes all other long service awards for members joining the Canadian Forces after 01 September 1939.

It is a decagonal (ten-sided, representing the ten provinces) gold plated brass medal, 36 mm across the flats, bearing:

A clasp (bar) shall be awarded for every subsequent period of ten years of qualifying service.

Initiated on 15 December 1949 and first awarded on 01 September 1951, the medal replaced all other long service awards for those joining the Canadian Forces after 01 September 1939 and is still current.

The decoration was initially issued in the King George VI type until 1954 when the new Queen Elizabeth II type became available. The George VI version was made of .800 silver and gilded. It bore the King's effigy and title; the suspension was a straight suspension bar bearing the word "CANADA" and the King's Cypher was superimposed on the maple leaves on the reverse. The George VI type clasp bore the scroll type shield of the Arms of Canada surmounted by the Tudor Crown (often referred to as the King's Crown).

The Decoration is engraved with the recipient's details (abbreviated substantive rank, initials and last name). The George VI version bore the naming on the reverse of the "CANADA" suspension bar; the current version is engraved on the rim of the medal itself.