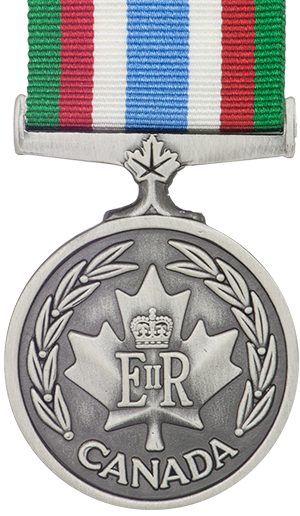 The prestigious Nobel Peace Prize was awarded to all United Nations Peacekeepers in 1988 in recognition of their collective efforts in the cause of peace. This inspired the creation of the Canadian Peacekeeping Service Medal (CPSM) to acknowledge the unique contribution to peace that Canadian peacekeepers have made since 1947.

Awarded for a minimum of 30 days cumulative service in a UN or international peacekeeping mission.

The medal is a circular medal, 36 mm diameter.

The medal shall be worn in sequence prescribed in the Canadian Orders, Decorations and Medals Directive, and in the following manner: on the left breast, suspended from the ribbon described above, after the Special Service Medal and before United Nations medals.

Almost 125,000 Canadian personnel have served in peacekeeping missions over the past 53 years. This record is unsurpassed by any nation. This tradition in the “service of peace” continues today.

The inaugural ceremony took place on 6 September 2000 at the Peacekeeping Monument in Ottawa where Her Excellency, the Right Honourable Adrienne Clarkson, CC, CMM, COM, CD, Governor General and Commander-in-Chief of Canada, presented the medal to 90 recipients representing the Canadian Forces (Serving and retired members), the Department of Foreign Affairs and International Trade and the Police Forces.