The official description, eligibility, criteria, and history of the Commander-in-Chief Unit Commendation. 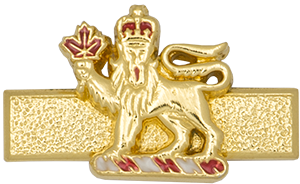 The Commander-in-Chief (CinC) Unit Commendation may be awarded to any unit, sub-unit, composite formation or other military group of the Canadian Forces (CF), or to any similar organization of a foreign armed force working with or in conjunction with the CF, that has performed an extraordinary deed or activity of a rare high standard in extremely hazardous circumstances.

The insignia is worn on the uniform in accordance with A-AD-265-000/AG-001, CF Dress Instructions. The insignia will be worn for life by members of the unit or persons attached to the unit, on duty and directly involved in the action for which the Commander-in-Chief Unit Commendation has been awarded. For awards approved before 2021 only, individuals posted to the unit after the award of the Commendation may only wear the insignia, on the right side of the uniform, during their affectation with the honoured unit.

In July 2002, the Right Honourable Adrienne Clarkson, then Governor General of Canada, created the Commander-in-Chief Unit Commendation. Since that time, a total of seven CinC Unit Commendations have been awarded with their respective citations as follows:

The Commander-in-Chief Unit Commendation is awarded to the 1st R22eR Battle Group (including N Coy, 3 RCR) for having opened the airport in the besieged city of Sarajevo in July 1992. While surrounded and being shot at by belligerents on all sides, the BG steadfastly executed its mission, securing the Sarajevo airport for humanitarian relief flights and escorting these relief convoys into the city. As a result of their presence, the anti-aircraft weapons, howitzers, and tanks stationed around the airport were soon forced to draw back. The superb effort of the BG led directly to the provision of critical aid for the war ravaged citizens of Sarajevo and helped in large measure establish the un in the eyes of the community as a vital force for world peace and security.

Between 4 February and 30 July 2002, the 3rd Battalion, Princess Patricia's Canadian Light Infantry Battle Group (3 PPCLI BG) spearheaded Operation APOLLO, Canada’s contribution to the international war against terrorism in Afghanistan. This was the first deployment into combat operations by a Canadian Army unit against a declared enemy in five decades. The Battle Group was deployed to a heavily mined and war-torn country for operations against an elusive enemy under the most extreme weather conditions. The Battle Group flawlessly conducted three complex air-assault operations into harsh, mountainous terrain, contributed successfully to a fourth, and set the standard within their parent United States Army brigade, Task Force Rakkasan, for security operations on the Kandahar airfield. Well-disciplined and well-led, the Battle Group distinguished itself in every facet of this exceptionally challenging operation. The extraordinary performance of the men and women of 3 PPCLI BG in the war against terrorism has brought great credit to the Canadian Forces and to Canada.

The 2nd Battalion Princess Patricia's Canadian Light Infantry Battle Group (2PPCLI BG) is awarded the Commendation for courageous and professional execution of duty during the Medak Pocket Operation in the Former Yugoslavia in September 1993. Under conditions of extreme peril and hazard, facing enemy artillery, small arms and heavy machine gun fire as well as anti-tank and anti-personnel mines, the members of the 2PPCLI BG held their ground and drove the Croatian forces back. The exemplary action of the 2PPCLI BG caused the Croatian Army to cease their ongoing tactics of "ethnic cleansing" in the sector, without question saving many innocent civilian lives.

From January to August 2006, the 1st Battalion, Princess Patricia’s Canadian Light Infantry Battle Group was engaged in almost continuous combat with a well-prepared and determined insurgent force in Afghanistan. During 29 major operations, the flexibility and remarkable cohesion shown by members of the battle group enabled them to overcome many hardships to suppress Taliban activity, to secure coalition forces’ freedom of movement, and to deliver humanitarian assistance throughout Kandahar province. The outstanding dedication and courage under fire displayed by these soldiers were instrumental in furthering peace and stability in this war-torn country.

During August and September 2006, the 1st Battalion, The Royal Canadian Regiment Battle Group played a decisive role in one of the largest ground combat operations in the history of NATO. Deployed to an area of Afghanistan with fierce enemy resistance and extremely difficult terrain, the members of the battle group resolutely defeated a well-coordinated insurgent force in the area surrounding Kandahar City. Succeeding where larger forces had failed, they prevented the enemy from realizing their goals of capturing the city and weakening international resolve and cohesion.

From July 2007 to February 2008, the 3rd Battalion, Royal 22e Regiment Battle Group displayed outstanding courage and resolve while battling insurgents in Afghanistan. Arriving at a difficult time for coalition forces, the members of the battle group worked aggressively to regain the initiative from the enemy. They were instrumental in dismantling improvised explosive device networks, re-capturing checkpoints and returning them to Afghan control, enhancing the capacity of Afghan forces, and providing guidance on community building and local governance. Their unrelenting efforts expanded the coalition’s security presence and brought hope to the Afghan people.

During August and September 2006, the 1st Battalion, 3rd Special Forces Group (Airborne), United States Army, displayed extraordinary heroism and outstanding combat ability while battling insurgents in support of a Canadian-led operation in Afghanistan. After completing their initial objectives, they willingly engaged a much larger force to secure the Canadian Battle Group’s flank and prevent the enemy from staging an effective counter-offensive. Outnumbered and facing a well-prepared enemy, they were relentless in their assault and eventually captured the position after days of intense fighting.