The official description, eligibility, criteria, and history of the Commissionaires Long Service Medal. 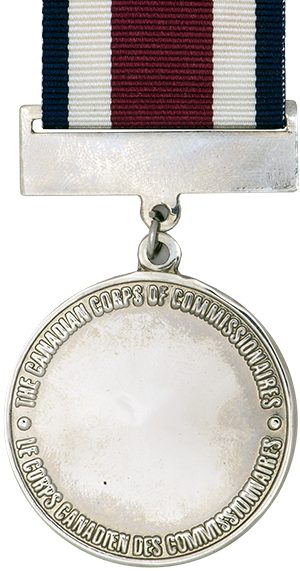 This Medal is administered by the Canadian Corps of Commissionaires. The Department of National Defence is providing this basic information until the Corps has the official details available on their own site.

The Medal is awarded for 12 years of service in the Corps.

A nickel-plated brass (silver in colour) circular medal of 35mm in diameter bearing:

A bar is awarded for each additional period of five years of service. A maximum of three bars may be awarded to an individual.

The Medal shall be worn in sequence prescribed in the Canadian Orders, Decorations and Medals Directive, and in the following manner:

This medal, first approved by the Secretary of State on 20 August 1948 (in a slightly different form) has been incorporated in the Canadian Honours system by Order in Council effective 26 February 1998. A certificate accompanies the award of the Medal.