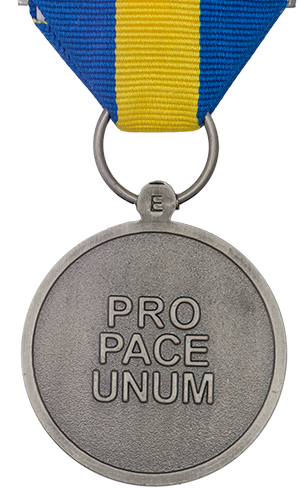 The European Union (EU) established this medal on 1 January 2003 to provide recognition to those who serve in EU-led crisis management operations.

Awarded to military and civilian personnel who have served 30 consecutive days either in the area of operations of a designated EU-led crisis management operations or in a EU HQ in designated positions in direct support of such operations.

The medal is always awarded with a bar to denote the mission for which it has been awarded.

The medal is circular, silver in colour, 35 mm in diameter and bears on the obverse the emblem of the EU, which consist of a circle of 12 stars. On the reverse appears on three lines, the Latin inscription “PRO PACE UNUM”.

The ribbon is 37 mm in width and is EU blue with a central 10 mm stripe of yellow gold for personnel serving in theatre; the central stripe being white for eligible HQ personnel.

The bars to the medal are of the slide-on type, silver in colour with a raised edge, and bear the name of the operation for which it is awarded on a stippled background.

The Medal is always to be issued with a bar representing a particular mission: