The official description, eligibility, criteria, and history of the Gulf and Kuwait Medal. 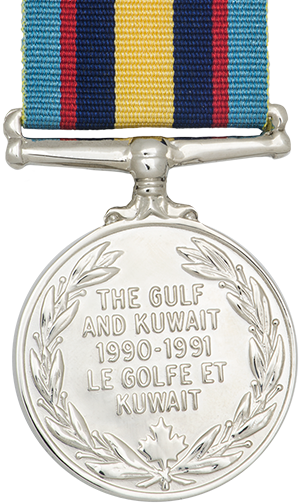 The Gulf and Kuwait Medal recognizes the participation of CF members deployed or in direct support of the operations against Iraq during the Gulf war. The medal is awarded to those employed during the build-up of troops before the beginning of hostilities, and a bar is awarded for those deployed during the actual war.

A person enrolled in, attached to, or working with the Canadian Forces may be awarded this medal if the person served a minimum of 30 cumulative days in theatre (between 02 August 1990 and 27 June 1991), on operations to defend against aggression and to liberate Kuwait qualify for the Medal.

Those who served for one day or more in the theatre of operations during actual hostilities (16 January 1991 to 03 March 1991) were awarded the Medal and bar.

The theatre of operations was the special duty area of the Persian Gulf, including Bahrain, Qatar, Kuwait, and Iraq as well as those other states on the immediate borders of Iraq.

The medal is a circular medal of copper and zinc alloy (silver in colour), 1.42 inches (36 mm) in diameter:

On the obverse: A crowned effigy of Queen Elizabeth II, facing right, circumscribed with the legend: ELIZABETH II DEI GRATIA REGINA CANADA, with CANADA positioned at the bottom.

A claw at the top of the medal is attached to a straight, slotted bar.

The ribbon is 32 mm wide with a sand-coloured (8 mm) middle stripe. Lying to each side of the middle stripe are three stripes representing the navy (dark blue, 5 mm), army (scarlet, 2 mm), and air force (light blue, 5 mm).

The bar is cupro-nickel (silver in colour) with a maple leaf at its centre.

Those who served for one day or more in the theatre of operations during actual hostilities (16 January 1991 to 03 March 1991) are entitled to the bar.

on the left breast, suspended from the ribbon described above, after the Royal Victorian Medal and before the Somalia Medal.

When the bar is awarded, it shall be attached to the center of the ribbon.

A silver maple leaf is worn on the ribbon in undress to denote the award of the bar.