The official description, eligibility, criteria, and history of the International Commission of Control and Supervision Vietnam (ICCS). 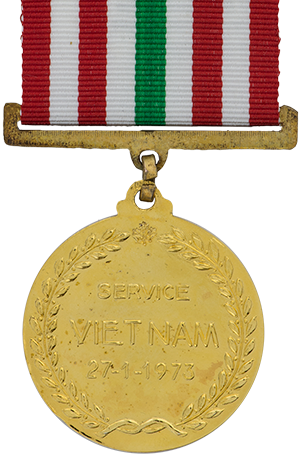 Note that although this is a military honour, the Chancellery of Honours at Rideau Hall is responsible for the administration of the replacements.

The 1,160 personnel of the commission were from Canada, Hungary, Indonesia, and Poland. Their role was to monitor the cease-fire in South Vietnam as per the Paris Peace Conference. The Commission arranged the release and exchange of more than 32,000 prisoners of war.

On the obverse the symbols of the four contributing countries are displayed in the centre with the Canadian maple leaf in the upper left position, and the Hungarian coat-of-arms, Polish Eagle and Indonesian coat-of-arms making up the other three symbols. Around the edge are the words: INTERNATIONAL COMMISSION OF CONTROL AND SUPERVISION.

On the reverse a wreath of laurel around the edge and the legend in three lines: SERVICE / VIETNAM / 17-1-73.

There is a small ring welded to the top of the medal. A small ring passes through this ring and attaches the medal to a ring at the bottom end of a thin laurel bar.

The medal shall be worn in sequence prescribed in the Canadian Orders, Decorations and Medals Directive, and in the following manner: on the left breast, suspended from the ribbon described above, after the ICSC medal and before the MFO medal.