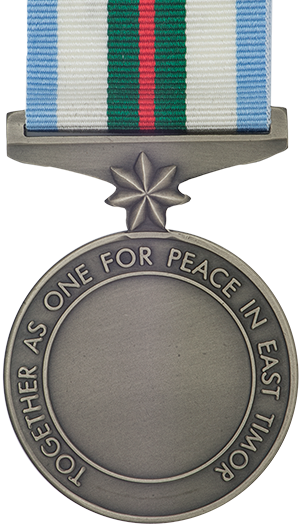 The Government of Australia established the International Force East Timor (INTERFET) to provide security and maintain law and order throughout the territory of East Timor, and to establish an effective administration of civil and social service and to support capacity-building for self-government.

Staff visits do not count as qualifying service.Members serving with United Nations Assistance Mission East Timor (UNAMET) do not qualify for this medal.

The medal is of cast metal 38 millimetres in diameter of a textured surface with raised and polished outer edge, ensigned atop with the [Australian] Federation Star, bearing:

The medal and hanging bar are stamped in one integral piece. The hanging bar is a straight, slotted bar with the seven-pointed Federation Star on both the obverse and reverse.