Member of the Order of Canada (CM)

The official description, eligibility, criteria, and history of the Member of the Order of Canada (CM). 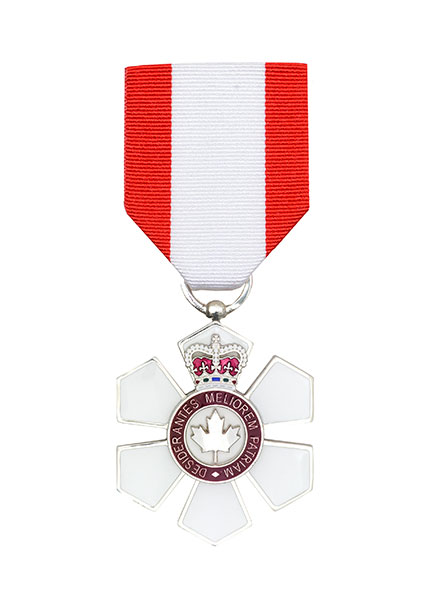 The design of the insignia of the Order of Canada dates from 1967 and is credited to Bruce Beatty, CM, SOM, CD. The technical drawings used by the Royal Canadian Mint in this new generation of the insignia were developed by the Canadian Heraldic Authority at the Chancellery of Honours, part of the Office of the Secretary to the Governor General. The insignia is manufactured by the Mint at its Ottawa facility. The ribbon of the Order is white, 38 mm wide, with red edges (9 mm).

The insignia of Member shall be worn following the Officer of the Order of Canada in the sequence prescribed in the Canadian Orders, Decorations and Medals Directive, and in the following manner: worn on the left breast, suspended from the ribbon described above.

Members are entitled to use the post-nominal letters “CM”.

To date, approximately 4,000 Canadians have been appointed Members of the Order of Canada.