The official description, eligibility, criteria, and history of the Meritorious Service Cross (MSC). 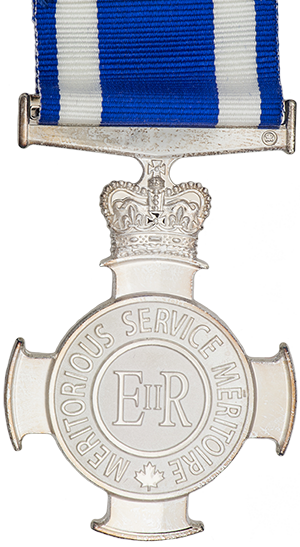 Military nominations shall be processed through the chain of command in accordance with A-AD-200-000/AG-000 - Honours, Flags and Heritage Structure of the Canadian Forces.

The Meritorious Service Cross (military division) recognizes a military deed or activity that has been performed in an outstandingly professional manner, according to a rare high standard that brings considerable benefit or great honour to the Canadian Forces.

The insignia is a silver Greek cross, 38mm across, with the ends of the convex arms splayed. It is ensigned with the Royal Crown which forms part of the ribbon mounting. Between the arms of the cross is a laurel wreath.

A straight (slotted) silver bar, through which the ribbon passes, is attached to the top point of the crown.

The ribbon for the military division is 32 mm wide, blue with two white stripes (6 mm wide), centred on the outer third of each side of the ribbon.

The bar is a silver bar with a maple leaf in the centre.

A bar is awarded for further activities that would have warranted award of the Cross.

The Cross shall be worn in sequence prescribed in the Canadian Orders, Decorations and Medals Directive, and in the following manner:

The award of a bar to the Cross is denoted by the wearing of a small silver maple leaf device on the undress ribbon.

A recipient is entitled to use the letters "MSC".

The names of the recipients are published in the Canada Gazette.

The insignia was designed by Bruce Beatty.