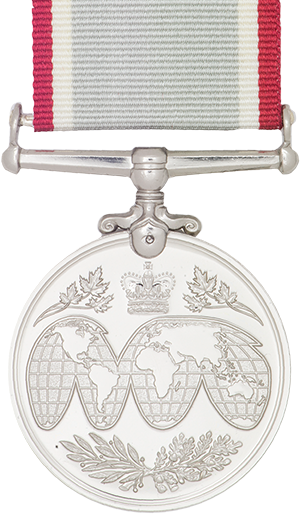 who served in a theatre of operations, provided direct support on a full-time basis to operations conducted in such a theatre, or served under dangerous circumstances outside Canada provided the said service is not counted towards another service medal other than the Canadian Peacekeeping Service Medal where applicable.

Other eligible service may be added to the eligibility list for the ribbon by the Chief of the Defence Staff in consultation with Armed Forces Council and on the recommendation of the Canadian Forces Honours Committee provided the service in question meets the basic criteria and intent of the medal as described in the regulations.

The OSM-EXP shall be worn in the sequence prescribed in the Canadian Orders, Decorations and Medals Directive, and in the following manner: