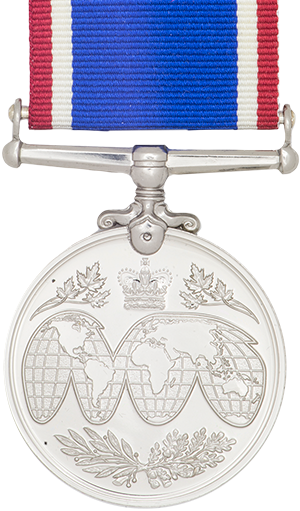 The OSM with HAITI ribbon is awarded for 30 cumulative days of service in Haiti between 6 March 2004 and 30 June 2017, or 21 cumulative days of service from 1 July 2017 onward. Primarily intended for CAF members who served with the US-led Multinational Interim Force (MIF) (Op HALO) as well as for direct support provided by the medical evacuation team in the Dominican Republic.

Service with the United Nations Stabilization Mission in Haiti (Operation HAMLET) is not eligible for this medal as it is recognized by the award of the MINUSTAH Medal.

The ribbon is 32 mm wide with a central stripe of royal blue (22 mm), on either side of which are stripes of white (2.5 mm) and red (2.5 mm). Red and white are the official colours of Canada as appointed by King George V in 1921, and the blue comes from the flag of Haiti

The OSM-H shall be worn in the sequence prescribed in the Canadian Orders, Decorations and Medals Directive, and in the following manner: