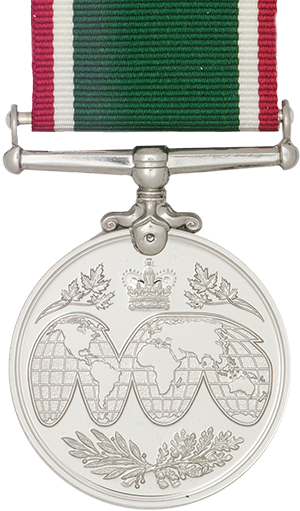 This general service award has been created as a means to recognize in a timelier manner those who serve in or provide support to overseas operations and for which no other medals, such as United Nations or NATO medals, are available. Rather than creating a new honour for each new Canadian Forces (CF) operation as it arises, the Operational Service Medal – with its theatre- or task-specific ribbons – can be awarded in future to honour participation in any operation that meets the criteria.

The OSM with SUDAN ribbon is awarded for 30 cumulative days of service in Sudan between 15 September 2004 and 29 July 2016, or 21 cumulative days of service from 30 July 2016 onward. Primarily intended for CAF members who served with the African Union-led mission in Darfur from 15 September 2004 to 31 December 2007 (Op AUGURAL) as well as for direct support provided to the operations conducted in the Sudan from Ethiopia and Senegal.

The ribbon is 32 mm wide with a central stripe of dark green (22 mm), on either side of which are stripes of white (2.5 mm) and red (2.5 mm). Red and white are the official colours of Canada as appointed by King George V in 1921, and the green comes from the flag of Sudan.

The OSM-S shall be worn in the sequence prescribed in the Canadian Orders, Decorations and Medals Directive, and in the following manner: