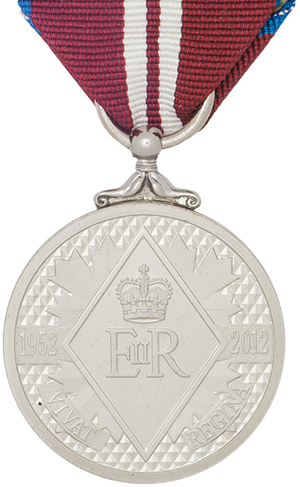 The Queen's Diamond Jubilee Medal commemorates the 60th anniversary of the Accession of Her Majesty Queen Elizabeth the Second to the Throne as Queen of Canada. The medal is administered by the Chancellery of Honours at Rideau Hall.

The list of partners in this medal program and their allocation of medals have been confirmed. During the anniversary year, 60 000 medals will be awarded, of which 11 000 will recognize members of the Canadian Forces (CF).

The military selection criteria is based on merit and includes guidelines to ensure the recipients are representative of the entire CF population, Regular and Reserve, including Cadet Instructors, Canadian Rangers, and holders of Honorary Appointments. The allocation of medals for the military will be administered by the Directorate of Honours and Recognition (DH&R).

To honour public service employees, medals have also been allocated to federal departments and agencies, including DND. Nominations will be made in accordance with the criteria above and using selection guidelines to ensure that recipients reflect the diversity of the department. The allocation of medals for public service employees within DND will be administered by the Corporate Awards and Recognition Team at ADM(HR-Civ).

Members of the Defence Team seeking details on criteria and selection guidelines may consult the Defence Information Network (DIN) where CANFORGEN 006/12 refers.

A circular medal, silver in colour and 32 mm in diameter, bearing:

A 0.5 inch (12 mm) ring, which holds the ribbon, passes through a small hollow ball at the top of a claw joined to the top of the medal.

The medal shall be worn in sequence prescribed in the Canadian Orders, Decorations and Medals Directive, and in the following manner: on the left breast, suspended from the ribbon described above, after the Queen’s Golden Jubilee Medal and before the RCMP Long Service and Good Conduct Medal.

The medal design was unveiled on 3 February 2011 at Rideau Hall by the Governor General and the Prime Minister. The criteria for the medal were announced on the occasion of Victoria Day weekend in 2011, and on 6 December of the same year, the Governor General symbolically struck the first medal at the Royal Canadian Mint.

The inaugural ceremony took place at Rideau Hall on Accession Day (6 February) 2012, on which occasion the Governor General presented the first 60 medals to representative recipients which included members of the Canadian Forces representing the three environments, the Regular Force and the Primary Reserve as well as the Cadet Instructors and the Canadian Rangers. While the medal is issued unnamed to most recipients, the first 60 recipients as well as some high ranking dignitaries on the table of precedence had their medal especially engraved with the date of the event “2012-II-06”on the edge.

The medal was designed by Cathy Bursey-Sabourin, Fraser Herald at the Canadian Heraldic Authority at the Chancellery of Honours, Rideau Hall, while the ribbon was designed by Major Carl Gauthier of the Directorate of Honours & Recognition.

The medal is struck in nickel-silver and lacquered to prevent tarnishing. It is manufactured by the Royal Canadian Mint.