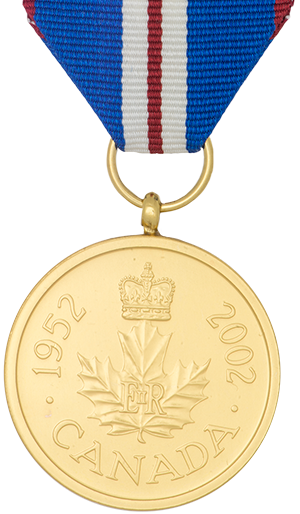 The Queen’s Golden Jubilee medal commemorates the 50th anniversary of the accession of Her Majesty Queen Elizabeth the Second to the throne. This commemorative medal program is now closed. This medal is administered by the Chancellery of Honours at Rideau Hall.

Canadian Forces members must be recommended by the Chief of Defence Staff to the Government of Canada. Selection is computer generated and distributed proportionally to Regular and Reserve members (including Cadet Instructors, Canadian Rangers, and Honorary Positions) by component, rank, Military Occupation, and years of service. CANFORGEN 024/02 CDS 017 refers.

On the reverse, the design of a stylised maple leaf with “CANADA” at the bottom and the years “1952” and “2002” on the left and right of the Royal Cypher and Crown.

A 0.5 inch (4 mm) gold ring, which holds the ribbon, passes through smaller ring attached to the top of the medal.

The colour of the ribbon is royal blue, with red outer stripes, double white stripe, and a red central stripe. This ribbon is identical to its British counterpart and is a variation of the 1953 Coronation Medal and the 1977 Silver Jubilee Medal ribbons.

The medal shall be worn in sequence prescribed in the Canadian Orders, Decorations and Medals Directive, and in the following manner: on the left breast, suspended from the ribbon described above, after the 125 Anniversary medal and before the RCMP Long service and Good conduct medal.

An estimated 46,000 medals were issued, of which approximately 9,600 were awarded to members of the Canadian Forces.

The medal was designed by the Government Honours Policy Sub-Committee.