The official description, eligibility, criteria, and history of the Queen's Medal for Champion Shot. 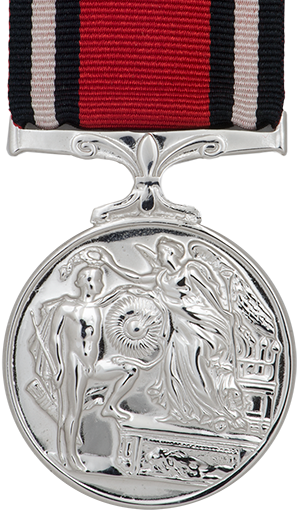 The medal is circular in form, made of silver, 1.42 inches (36 mm) in diameter with a thin raised edge.

On the obverse: The crowned effigy of Her Majesty circumscribed with the legend “ELIZABETH II DEI GRATIA REGINA” and incorporating the word “CANADA” at the bottom.

On the reverse: A figure of Fame rising from her throne, a horn in her left hand, facing left, and crowning with a laurel wreath in her right hand a warrior facing right, who is standing on his right foot with his left foot raised and resting on the dais, supporting on his left knee a target having three arrows in the centre and holding in his right hand a bow and quiver full of arrows.

Until 2002, a single-toe claw joined the medal to a plain, straight non-swivelling suspender. Since 2002, the suspension has been changed to a straight slotted bar ornamented with a fleur-de-lis, similar to that of the Exemplary Service Medals.

The ribbon which is 32 mm in width and dark crimson in colour is bordered on each side with a black stripe 9 mm in width with a beige stripe 3 mm in width centered on the black stripes. The ribbon of this medal is identical to its British predecessor.

Until 2002, the "date bars" were riveted to the suspension of the medal like on its British predecessor. Since 2002, the bars are sewn onto the ribbon and worn centered on it.

The Medal is awarded with a plain bar with the year of the competition inscribed thereon, and any subsequent award of the Medal shall be indicated by the award of another bar only.

The Queen's Medal for Champion Shot shall be worn in sequence prescribed in the Canadian Orders, Decorations and Medals Directive, and in the following manner: on the left breast, suspended from the ribbon described above, after the Peace Officer Exemplary Service Medal and before the Service Medal of the Most Venerable Order of the Hospital of St. John of Jerusalem.

Until 1991, the medals issued in Canada were similar in design to their British counterparts.

The current medal was designed by Bruce Beatty.