The official description, eligibility, criteria, and history of the UN Emergency Force (UNEF). 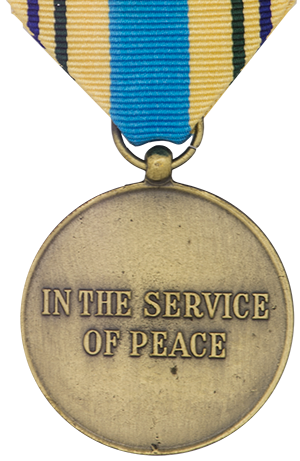 Through the efforts of Canada's External Affairs Minister, Lester B. Pearson, the UN General Assembly agreed to its first peacekeeping force to secure peace in the region (previous operations had been only observer forces). Under the command of a Canadian, MGen Eedson Louis Millard BURNS, (OC) DSO OBE MC, the UNEF, on 07 November 1956, was given a mandate to secure the removal of Israeli, British, and French troops from the Suez canal zone and the Gaza Strip and to maintain peace in the area. The first Canadian troops arrived in Egypt on 24 November 1956, and Egypt abruptly asked them to leave in May 1967, leading to the six-day war between Israel and Egypt. Thirty-two Canadians lost their lives serving with this force.

On the obverse, the emblem of the United Nations with the addition of the curved letters UNEF.

On the reverse, an inscription bearing the words “IN THE SERVICE OF PEACE” (only in English).

The ribbon has a background of a sand or buff colour symbolizing the Sinai with a wide centre band of UN blue. Two thin lines in dark blue and green appear at either end of the ribbon: the blue representing the Suez Canal, and the green, the Nile Valley.

The medal shall be worn in sequence prescribed in the Canadian Orders, Decorations and Medals Directive, and in the following manner: on the left breast, suspended from the ribbon described above, after the Canadian Peacekeeping Medal and before the UNTSO medal.