The official description, eligibility, criteria, and history of the UN Stabilization Mission in Haiti (MINUSTAH). 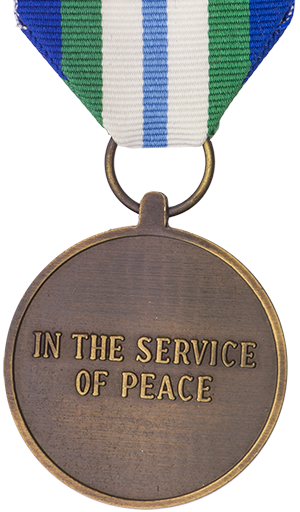 In February 2004, anti-Aristide forces began a march on Port-au-Prince, leading to the overthrow of President Jean-Bertrand Aristide. At the new government's request, the UN sent in an interim force to re-establish peace. MINUSTAH followed, with a mandate to re-establish a secure environment, promote human rights, and assist in the delivery of humanitarian aid.

A circular bronze alloy medal, 1.4 inches (35mm) in diameter. On the obverse, the representation of the UN symbol surmounted by the straight letters UN, both in bas-relief. On the reverse, an inscription bearing the words "IN THE SERVICE OF PEACE" in English (and only in English).

The ribbon bears a central band of blue representing the United Nations bordered by stripes of white symbolizing the promise of peace for the Haitian people. Green symbolizing the lush green countryside and economic potential of Haiti and royal blue symbolizes the ocean surrounding the island of Hispaniola.

The medal shall be worn in sequence prescribed in the Canadian Orders, Decorations and Medals Directive, and in the following manner: on the left breast, suspended from the ribbon described above, after the UNMEE medal and before the ONUCI medal.