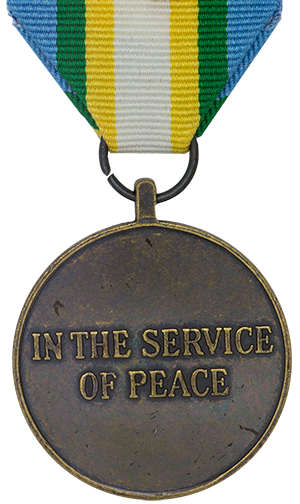 The Security Council resolution 1769 of 31 July 2007 and the communiqué of the 79th meeting of the African Union Peace and security Council of June 2007 established the United Nations - African Union Hybrid Mission in DARFUR. The mission, which stood up at El Fasher, Sudan, on 1 January 2008, and replaced the African Mission in Sudan (AMIS), is mandated to help the Security Council achieve an overall objective of supporting the implementation of the DPA and subsequent agreements, prevent disruption of their implementation, prevent armed attacks, and protect civilians without prejudice to the responsibility of the Government of Sudan. UNAMID will also contribute to security for humanitarian assistance, monitor and verify implementations of agreements, assist an inclusive political process, and contribute to the promotion of human rights and rule of law.

The ribbon is United Nations blue with a central white stripe flanked by stripes of yellow-gold and green. The blue and white are the UN colours, while the gold and green represent the African Union. The Sudan is represented by green and white; the latter colour is also the symbol of peace.

The medal shall be worn in sequence prescribed in the Canadian Orders, Decorations and Medals Directive, and in the following manner: on the left breast, suspended from the ribbon described above, after the UNMIT medal and before the UNMISS medal.