The official description, eligibility, criteria, and history of the Victoria Cross (VC). 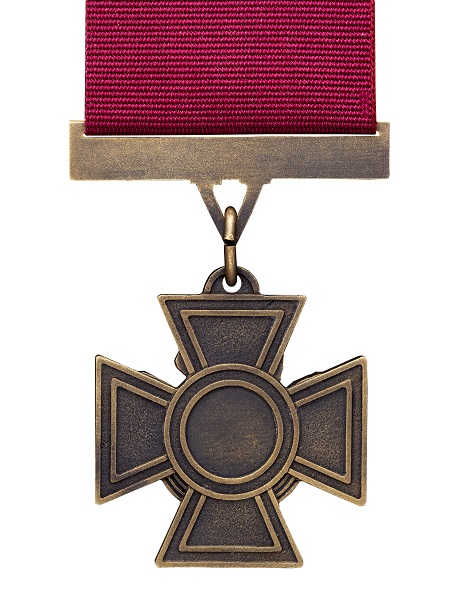 Created on 1 January 1993, Military Valour Decorations are national honours awarded in recognition of acts of valour, self-sacrifice, or devotion to duty in the presence of the enemy.

A person is eligible to be awarded a Military Valour Decoration if that person, on or after 1 January, 1993, is:

The Victoria Cross shall be awarded for the most conspicuous bravery, a daring or pre-eminent act of valour or self-sacrifice, or extreme devotion to duty, in the presence of the enemy.

A bronze straight-armed cross pattee, 38 mm across, with raised edges:

The Cross is suspended by means of a plain link from a V below a straight bar ornamented with laurel leaves, on the back of which is engraved the rank, name, and unit of the recipient.

The ribbon is crimson and measures 38 mm in width. Note that the ribbon is identical to its British predecessor.

Each subsequent award of the Cross shall be indicated by a plain bronze bar ornamented with laurel leaves. The bar shall be attached to the centre of the ribbon from which the Cross is suspended, and where two or more bars are attached, those bars shall be equally spaced on the ribbon.

The Cross shall be worn in sequence, as prescribed in the Canadian Orders, Decorations and Medals Directive, and in the following manner:

Recipients are entitled to the use of the post-nominal letters “VC”.

For more information on the history of the Victoria Cross, please consult the Victoria Cross’ main page where you will have access to The Military Valour Decorations 1993-2018 [PDF - 8.13MB] publication which celebrates the 25th anniversary of the creation of the Military Valour Decorations by Her Majesty The Queen. In addition, this page will also give you access to other information and will allow you to consult the revised edition of Pro Valore: Canada’s Victoria Cross which is a brief examination of the creation of the new Victoria Cross and the history of this decoration within the Canadian military.