As stated in the following London Gazette citation, Andrew Charles Mynarski is a recipient of the Victoria Cross. This medal is awarded for the most conspicuous bravery, a daring or pre-eminent act of valour, or self-sacrifice or extreme devotion to duty in the presence of the enemy. 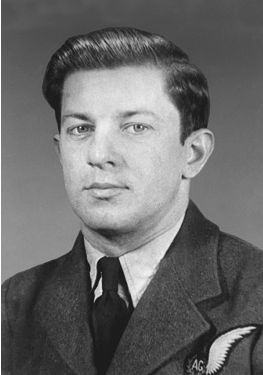 Andrew Charles Mynarski was born in Winnipeg, Manitoba on 14 October 1916. He joined the Royal Canadian Air Force (RCAF) in 1941.

On the night of 12 to 13 June 1944, Pilot Officer Mynarski was the mid-upper gunner in an Avro Lancaster bomber of 419 Squadron, RCAF during an attack on the railway yards at Cambrai, in France. When the aircraft was attacked by a German night fighter, both port engines failed, and fire broke out between the mid-upper and rear gun turrets, as well as in the port wing fuel tanks. Soon the flames grew to such an extent that the pilot ordered the aircraft abandoned. As Mynarski left his turret and proceeded toward the escape hatch, he saw that the rear gunner, Flying Officer G.P. Brophy, was unable to get out of his turret, which could not be moved due to the failure of both the hydraulic and manual systems. At once Mynarski made his way aft through the fire in an attempt to free Brophy. With his parachute and the clothing below his waist now on fire, Mynarski strained to move the turret and release Brophy, but to no avail. At this point, Brophy indicated clearly that there was no more to be done, and that Mynarski should save himself. Reluctantly, Mynarski went back through the flames to the escape hatch and jumped, his parachute and clothing all on fire. After landing, he was eventually found by the French, but died due to the severity of his burns.

For his courageous and selfless attempt to save his crewmate, Pilot Officer Mynarski was awarded the Victoria Cross posthumously. Miraculously, Flying Officer Brophy survived the crash of the stricken and abandoned Lancaster, and, courtesy of the French Resistance, was back in England in September.

“Pilot Officer Mynarski was the mid-upper gunner of a Lancaster aircraft, detailed to attack a target at Cambrai in France, on the night of 12th June, 1944. The aircraft was attacked from below and astern by an enemy fighter and ultimately came down in flames.

As an immediate result of the attack, both port engines failed. Fire broke out between the mid-upper turret and the rear turret, as well as in the port wing. The flames soon became fierce and the captain ordered the crew to abandon the aircraft.

Pilot Officer Mynarski left his turret and went towards the escape hatch. He then saw that the rear gunner was still in his turret and apparently unable to leave it. The turret was, in fact, immovable, since the hydraulic gear had been put out of action when the port engines failed, and the manual gear had been broken by the gunner in his attempts to escape.

Without hesitation, Pilot Officer Mynarski made his way through the flames in an endeavour to reach the rear turret and release the gunner. Whilst so doing, his parachute and his clothing, up to the waist, were set on fire. All his efforts to move the turret and free the gunner were in vain. Eventually the rear gunner clearly indicated to him that there was nothing more he could do and that he should try to save his own life. Pilot Officer Mynarski reluctantly went back through the flames to the escape hatch. There, as a last gesture to the trapper gunner, he turned towards him, stood to attention in his flaming clothing and saluted, before he jumped out of the aircraft. Pilot Officer Mynarski’s descent was seen by French people on the ground. Both his parachute and clothing were on fire. He was found eventually by the French, but was so severely burnt that he died from his injuries.

The rear gunner had a miraculous escape when the aircraft crashed. He subsequently testified that, had Pilot Officer Mynarski not attempted to save his comrade’s life, he could have left the aircraft in safety and would, doubtless, have escaped death.

Pilot Officer Mynarski must have been fully aware that in trying to free the rear gunner he was almost certain to lose his own life. Despite this, with outstanding courage and complete disregard for his own safety, he went to the rescue. Willingly accepting the danger, Pilot Officer Mynarski lost his life by a most conspicuous act of heroism which called for valour of the highest order.”