As stated in the following London Gazette citation, George Harry Mullin is a recipient of the Victoria Cross. This medal is awarded for the most conspicuous bravery, a daring or pre-eminent act of valour, or self-sacrifice or extreme devotion to duty in the presence of the enemy. 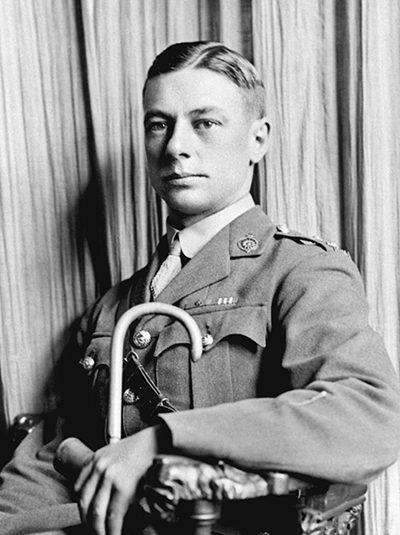 George Harry Mullin was born in Portland, United States, on 15 August 1891. When he was two, his family moved to Canada, settling in Moosomin, Saskatchewan. During the First World War, Mullin served in the scout and sniper section of Princess Patricia’s Canadian Light Infantry, Canadian Expeditionary Force. For his conduct on the occasion of the successful attack by the Canadian Corps on Vimy Ridge in April 1917, he received the Military Medal.

On 30 October 1917 near Passchendaele in Belgium, a company of the PPCLI was attempting to eliminate a German “pillbox” fortification that was blocking its advance and causing heavy casualties. While one group of Patricias led by Lieutenant Hugh McKenzie made a frontal attack on the pillbox and drew its fire, Sergeant Mullin approached from the flank and crawled onto the top of the concrete structure, disposing of an enemy sniper’s position on the way. From this vantage point, Mullin shot two German machine gunners with his revolver before compelling the other ten occupants of the pillbox to surrender.

For the courage he demonstrated in this action, Sergeant Mullin was awarded the Victoria Cross.

“For most conspicuous bravery in attack, when single-handed he captured a commanding ‘Pill-box’ which had withstood the heavy bombardment and was causing heavy casualties to our forces and holding up the attack. He rushed a sniper’s post in front, destroyed the garrison with bombs, and, crawling on top of the ‘Pill-box,’ he shot the two machine-gunners with his revolver. Sjt. Mullin then rushed to another entrance and compelled the garrison of ten to surrender.

His gallantry and fearlessness were witnessed by many, and, although rapid fire was directed upon him, and his clothes riddled by bullets, he never faltered in his purpose and he not only helped to save the situation, but also indirectly saved many lives.”