As stated in the following London Gazette citation, Harcus Strachan is a recipient of the Victoria Cross. This medal is awarded for the most conspicuous bravery, a daring or pre-eminent act of valour, or self-sacrifice or extreme devotion to duty in the presence of the enemy. 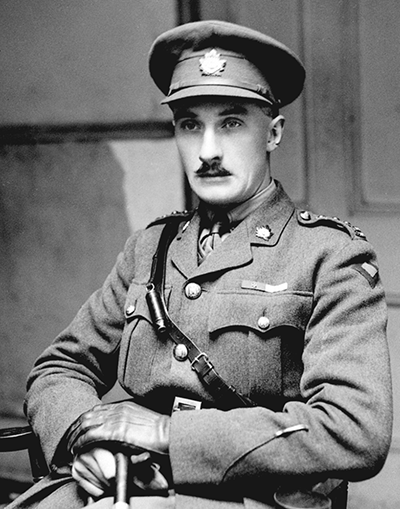 Harcus Strachan was born in Borrowstounness, Scotland, on 7 November 1887. He immigrated to Canada in 1908 and enlisted in the Fort Garry Horse in 1915. He was commissioned the following year. In May 1917 Strachan was awarded the Military Cross after a raid near St. Quentin. Six months later, he earned the Victoria Cross in Masnières, France, 20 November 1917 in a similar action.

He took command of his squadron when the squadron leader was killed. Lieutenant Strachan led the squadron through the enemy line of machine-gun posts, and then, with the surviving men, led the charge on the enemy battery, killing seven of the gunners with his sword. With the German battery silenced, Strachan went on to cut telephone communications three kilometres behind the enemy line. He then rallied his men and fought his way back at night to his own lines, safely bringing in all his unwounded men, in addition to fifteen prisoners.

Strachan died in Vancouver, British Columbia, on 1 May 1982.

“For most conspicuous bravery and leadership during operations.

He took command of the squadron of his regiment when the squadron leader, approaching the enemy front line at a gallop, was killed. Lt. Strachan led the squadron through the enemy line of machine-gun posts, and then, with the surviving men, led the charge on the enemy battery, killing seven of the gunners with his sword. All the gunners having been killed and the battery silenced, he rallied his men and fought his way back at night through the enemy’s line, bringing all unwounded men safely in, together with 15 prisoners.

The operation – which resulted in the silencing of an enemy battery, the killing of the whole battery personnel and many infantry, and the cutting of three main lines of telephone communication two miles in rear of the enemy’s front line – was only rendered possible by the outstanding gallantry and fearless leading of this officer.”