As stated in the following London Gazette citation, John MacGregor is a recipient of the Victoria Cross. This medal is awarded for the most conspicuous bravery, a daring or pre-eminent act of valour, or self-sacrifice or extreme devotion to duty in the presence of the enemy. 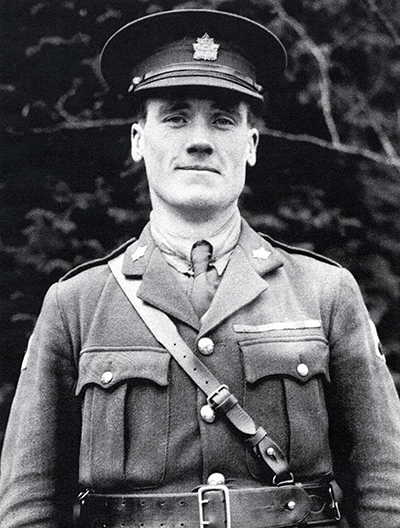 John MacGregor was born in Cawdor, Scotland on 11 February 1888. He served in the First World War with the 2nd Canadian Mounted Rifles, first as a private soldier and then as a commissioned officer. MacGregor earned the Distinguished Conduct Medal as a private, the Military Cross (MC) as a lieutenant, and a Bar to his MC as a captain. MacGregor was awarded the Victoria Cross for his actions from 29 September to 3 October 1918. When the advance of his company was stopped by intense German machine gun fire near Cambrai in France, he continued to move forward until he had located the guns. Despite their heavy fire, MacGregor then charged the machine guns and dealt with their crews using rifle and bayonet, killing four of the enemy and taking eight prisoners. Later, he gave useful support to neighbouring troops by taking command of the leading waves of the advance and continuing forward while under heavy fire and faced with stubborn resistance. MacGregor subsequently undertook a dangerous daylight reconnaissance that allowed his company to occupy Neuville-St-Rémy.MacGregor died in Powell River, British Columbia on 9 June 1952.

For most conspicuous bravery, leadership and self-sacrificing devotion to duty near Cambrai from 29th September to 3rd October, 1918.

He led his company under intense fire, and when the advance was checked by machine guns, although wounded, pushed on and located the enemy guns. He then ran forward in broad daylight, in face of heavy fire from all directions, and, with rifle and bayonet, single-handed, put the enemy crews out of action, killing four and taking eight prisoners. His prompt action saved many casualties and enabled the advance to continue.

After reorganising his command under heavy fire he rendered the most useful support to neighbouring troops. When the enemy were showing stubborn resistance, he went along the line regardless of danger, organised the platoons, took command of the leading waves, and continued the advance. Later, after a personal daylight reconnaissance under heavy fire, he established his company in Neuville St. Remy, thereby greatly assisting the advance into Tilloy. Throughout the operations Capt. MacGregor displayed magnificent bravery and heroic leadership.”