As stated in the following London Gazette citation, John Weir Foote is a recipient of the Victoria Cross. This medal is awarded for the most conspicuous bravery, a daring or pre-eminent act of valour, or self-sacrifice or extreme devotion to duty in the presence of the enemy. 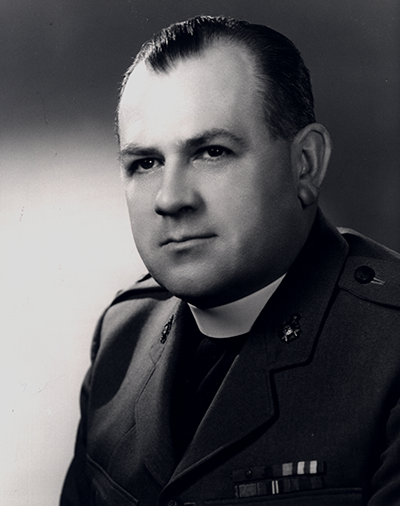 John Weir Foote was born in Madoc, Ontario on 5 May 1904. A Presbyterian minister, he joined the Canadian Chaplain Service at the beginning of the Second World War.

On 19 August 1942 Honorary Captain Foote was attached to the Royal Hamilton Light Infantry (RHLI), one of the battalions from the 2nd Canadian Infantry Division that participated in the raid on the French port of Dieppe on that day. After landing, Padre Foote assisted the RHLI’s medical officer in caring for the wounded at the regimental aid post. However, he frequently left the relative safety of that location for the open beach where he rendered first aid, and gave injections of morphine to alleviate the suffering of the many wounded who were there. Later, he carried wounded men from the regimental aid post to landing craft waiting to evacuate the survivors of the raiding force. Padre Foote declined the opportunity to embark, preferring to continue to minister to those left behind, and to share their fate as prisoners of war.

At the end of the war, Padre Foote received the Victoria Cross for his conduct at Dieppe, the first ever awarded to a Canadian chaplain. He died in Hamilton, Ontario on 2 May 1988.

On several occasions this officer had the opportunity to embark but returned to the beach as his chief concern was the care and evacuation of the wounded. He refused a final opportunity to leave the shore, choosing to suffer the fate of the men he had ministered to for over three years.

Honorary Captain Foote personally saved many lives by his efforts and his example inspired all around him. Those who observed him state that the calmness of this heroic officer as he walked about, collecting the wounded on the fire-swept beach will never be forgotten.”